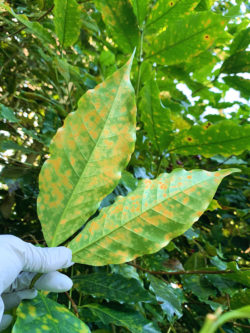 A pathogen devastating for coffee plants has been confirmed on Molokai among wild coffee plants. The Hawaii Department of Agriculture (HDOA) detected coffee leaf rust (CLR) on June 14 during a survey of feral coffee in Kaunakakai. Further surveys detected more CLR on the east side of the island. The disease is now found on all major Hawaiian Islands.

CLR is a devastating coffee pathogen first discovered in Sri Lanka in 1869. It can cause severe defoliation of coffee plants, and both the leaf and berry growth can be affected and greatly reduced. Long-term impacts of CLR includes severe dieback, with crop losses ranging from 30 to 80 percent, according to HDOA.

The Kaunakakai detection of CLR was considered “low-level,” with two coffee plants in a field of 50 wild plants being affected. The east end infestation has been estimated to have been active for at least three months.

HDOA also just confirmed detection for the first time on Kauai, reported by a commercial coffee grower.
CLR was first detected in the state in October 2020 on Hawaii Island and Maui and subsequently detected on Oahu and Lanai in January of this year.

Since it was first found in the state, the Hawaii Board of Agriculture (Board) approved a temporary rule to restrict the movement of coffee plants, plant parts and other CLR hosts from infected islands to try to stop the spread of the disease. Now, with the detection of CLR statewide, HDOA is reassessing these restrictions. But they will remain in place until further action is taken by the Board or the interim rule lapses in November.