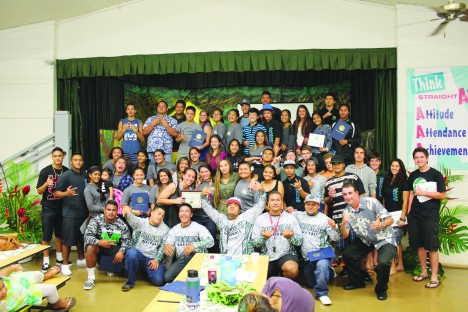 Another sports season, full of buzzer beaters, towering touchdowns and sizzling spikes, has come to an end at Molokai High School. Last week at Molokai’s athletic banquet, the school celebrated the 187 student athletes and nearly 50 coaches who participated in 16 different sports this season.

Every athlete in attendance got a recognition certificate and a moment on stage in the banquet’s first-ever Parade of Athletes. Coaches, many of whom juggled other jobs off the field, were honored with lei and greeted by every athlete.

“Sports is everything,” said junior wrestler Cendall Manley. “… It’s more than just being involved, it’s the family aspect. It’s learning to do things even when you don’t want to do them. It’s pushing through the pain.”

This athletic school year was marked by several firsts. In the fall, Molokai won its first boys’ cross country and boys’ air riflery MIL titles. During the winter season, Lee DeRouin stepped in as the school’s new AD, and in the spring the softball team unveiled its new field, while the school’s judo team made its MIL debut.

DeRouin said he enjoys seeing the impact sports can have on the athletes.