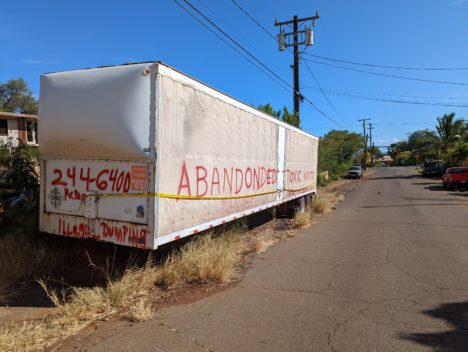 Thanks to local efforts, a long-abandoned apartment building at Kahinani Place has finally seen significant improvement.

Right off Kamehameha V Highway, the apartments at the base of Kahinani Place have sat vacant for years. Longtime neighborhood resident Todd Yamashita believed the condos have been empty since the early 1980s. While occupants no longer inhabit the property, the land has not sat unused. Rather, it has become the holding site for noxious chemical waste.

The abandoned land functioned as a septic business base yard, according to Yamashita. Passersby can still see the scattered remains of port-a-potties and discarded equipment.

The most prolific of these leftovers was a 40-foot trailer containing “thousands of gallons of waste oil parked in an unstable position” amounting to “clear and present danger,” according to local resident Doug Rogers in an October letter entitled “Mahalo Mayor Victorino” published in The Molokai Dispatch.

Yamashita explained that the positioning of the trailer would have allowed this oil and sludge to seep into the watershed and drain into the nearby fishpond.

Having personally climbed into the trailer, Yamashita attested that the abandoned site was a “ticking time bomb.”

That is where Mayor Mike Victorino got involved.

“True to his word, when it was brought to his attention, he lit a fire under the right okole and it is gone, gone, gone,” said Rogers in his letter published by The Dispatch.

Alerted to the precarious situation by county council members, Victorino went several times to the site and met with local residents involved with the project. Difficulties for the project included the fact that the trailer sat on private land and that it was unclear what materials exactly were being stored there.

While Victorino was not at liberty to discuss precisely what chemicals were present, he explained that even though they were “not life threatening” they definitely “shouldn’t be there.”

Victorino’s hope is that this project frees up Kahinani Place for productive use, like affordable housing. Likewise, he hopes that “residents can sleep well at night” without the fear of a toxic spill.

“It was my honor and pleasure to serve the people of Molokai,” said Victorino. “It was some of the many little things that were done that had a profound effect on others.”

Wade Nakayama, owner of Molokai’s Lena Blue Services, was also involved with the cleanup of the site. Supplying compressors and a forklift, Nakayama’s company was brought in as a subcontractor to facilitate the process.

Nakayama confirmed that the waste was disposed safely off island.