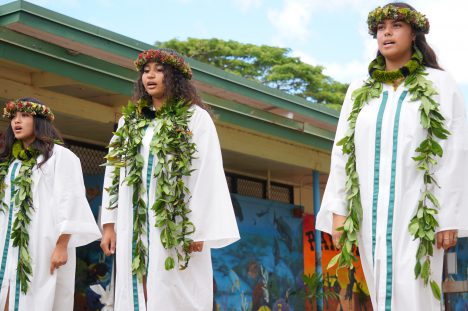 When this year’s Molokai High School senior class left for spring break, they had no idea they’d never have a class on the Molokai High campus again, get to have a traditional graduation ceremony in the Barn, or even hug each other after receiving their diplomas. But after the COVID-19 pandemic changed everything, they became the first class to ever be handed their diplomas at arm’s length in front of the school steps as their families looked on from their vehicles.

“As a class we won’t be able to experience what it would be like to have a traditional graduation in the Barn,” said class president and salutatorian Kayla DeRouin in her speech. “We will never know the feeling of being so nervous while waiting upstairs in the wrestling room for the ceremony to start. Or make a funky handshake before walking down the aisle, or hearing our family yelling our names and cheering us on as we take our seats. We will never know how it feels to have leis piled to the top of our heads or have floaties wrapped around our waist. But missing these experiences is not going to stop us from being the best versions of ourselves, because we are strong, resilient and determined.”

The ceremony was only open to the 74 seniors and their immediate families, and while many graduations around the state were strictly drive thru, Molokai High’s commencement included some traditional elements like the opening oli, Star Spangled Banner, Hawaii Pono’i and the Alma Mater — all sung by small groups of students standing six feet apart — as well as four student speeches.

During the elaborate choreography of the ceremony, seniors and their families, inside their vehicles, were ushered to park in a specific order in the student parking lot across the street. Staff then directed them to drive in front of the school while students exited their cars one by one to receive their diplomas. The event was also streamed live on Akaku Molokai so extended family and friends could watch from afar.

“We’re just trying to make the impossible, possible,” said Vice Principal Kainoa Pali before the ceremony, pointing to a color coded map depicting every detail of the plan. 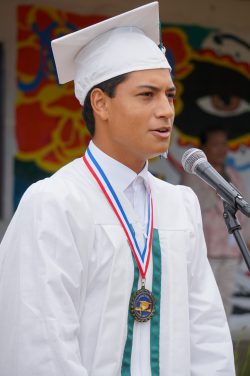 For Jalen Kalama, of one the class’ three valedictorians, he said he’s learned that the impossible, is, in fact, possible.

“I know this isn’t the way we wanted our senior year to end and this isn’t the outcome we hoped for. But I’d like to use my two minutes to talk about how tremendous of a year it was,” he said. “The main thing I’ve learned at this school for three years is that anything is possible… Molokai High School is the place where anything can happen. Molokai High School is the place where anyone can rise. And here, on this island, on this soil, the most incredible dreams come true. This school is our canvas and these achievements are our masterpiece…. The best is yet to come.”

Families hung out the windows of decorated cars, trucks and vans, watching as their seniors gave speeches and were handed their diplomas. 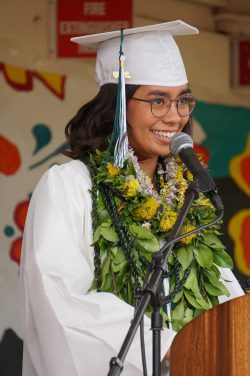 In a moving and poetic speech, valedictorian Ayla-Rose Naehu-Ramos asked, “Who is your evening star?”

“Molokai No Ka Heke, my island, my home. Keawanui fishpond, where I ran around half naked and ate green mangoes. Honouliwai, with your river that sings me to sleep. Molokai Aina Momona, you are my evening star.”

Locking eyes with her mother, who sat in the car with her family across the median, Naehu-Ramos thanked her.

“You have given me life, cradled my dreams in your arms and put me to sleep. And my breath is yours… My evening star.”

For valedictorian Maria Angst — the first Molokai student to graduate with her college degree before her high school diploma — not being able to have the community’s participation in graduation was one of the hardest parts, even though she was grateful for still being able to have a ceremony at all.

“We believe that the community is part of our family and graduation is a big part of that each year,” she said in an interview last week. “We feel like not just graduation was stolen from us, but stolen from our community. We are a class that grew into a family, that’s what I believe.”

And though the community couldn’t be there, the entire campus erupted in cheers, whistles and car horn blasts as students turned the tassels of their hats in their cars and officially became alumni.

Despite the adversities brought by COVID-19, the Molokai High graduates celebrated many incredible accomplishments.

“Class of 2020…you already have a classmate going to one of the top universities in the nation, a rising football star with only a year of playing, and a two-year college graduate among you,” said Principal Dr. Katina Soares. “So much talent and opportunity. The lesson here is a graduation ceremony doesn’t define you. Life is a series of moments, challenges, choices and opportunities. I see every challenge as an opportunity to grow….So how will you change and grow because of this present challenge?” 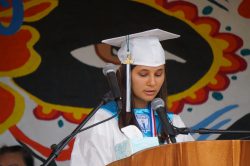 Angst had been taking college classes since she was a freshman in high school, and received her associate’s degree the week before graduating high school, though the UH Maui College, Molokai ceremony, held every four years and scheduled for May 15, was cancelled.

She will attend University of San Diego, where she’s deciding between focusing on economics or environmental engineering.

“The class of 2020 has made history over the years,” said Angst in her speech. “We’re the first class in Molokai High School’s history to win Homecoming four years in a row. And the first class to be both very athletic and attractive. Now, we are the first class to graduate drive thru style, grabbing our diplomas as if it’s our order we were longing for all day, or in our case, for the past 13 years.”

Naehu-Ramos will be attending Princeton University this fall, the first Molokai High grad to do so, where she plans to major in art and creative writing on a full scholarship.
“I was kind of devastated, really,” she said about not being able to return to school after spring break, in an interview last week. “It came as such a shock to me… I’m really sad that I didn’t get to know that I wasn’t going to get to see them in school again, I would have said bye. That part is kind of heavy and hurts a bit.”

Molokai High students were offered the opportunity to raise their final grades, calculated from the first three quarters, by doing extra work virtually. For the valedictorians, however, whose GPAs were already over 4.0, the hard work was behind them. 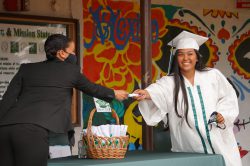 Naehu-Ramos made the best of the extra free time at home the last two months, where she said she’s been able to do more art and reading.

“It’s been a really challenging and different time for everybody but I think in some ways it might be a good thing because it’s helped us get more used to learning in alternative ways and staying more self reliant and independent,” she said. “And it’s also given us a very good time to just tend our ourselves.”

The school held a traditional ceremony at a private location two weeks ago, with social distancing and only immediate family present, said Dudoit.

Aka’ula School will hold a private ceremony for its single senior this week. 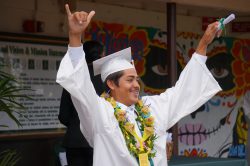 Saturday afternoon, Molokai graduates from MHS, Ho’omana Hou, Kamehameha and Lahainaluna high schools gathered for a bus convoy, traveling around the island and paying tribute to the elementary schools. Parent organizer Bill Dudoit, whose daughter was among the graduates, said he wanted to do something that would celebrate all the students. Instead of the “adopt a senior” initiative on Facebook, he said those wanting to support the effort donated toward the cost of the buses “so everyone can benefit from it.”

“For our little small island of Molokai, because everybody is ‘ohana and everybody knows each other others’ kids, how can we just adopt one?” he said of “adopt a senior.”

The eight buses, each carrying about nine students, traveled to communities around the island, offering ho’okupu to the principals of each elementary school on their way.

“It’s just been an outpouring of love from the whole island,” said Dudoit. “It’s not exactly what they [seniors] envisioned, but at least we’re putting together something so 10, 20 years down the road, they have something to look back on.” 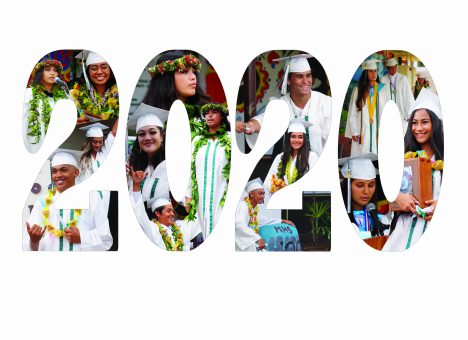