Class of 2019 Comes Together

The class of 2019 got together in lifeboats last Friday morning and decided what items to keep and which to toss overboard. Each group’s decisions had to be unanimous, and they had to work quickly as their lifeboats took on water. These sixth graders from across the island weren’t preparing for Sunday’s heavy rains, though. The lifeboats were picnic tables, and the 104 students were getting ready for middle school. 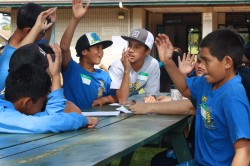 “As they transition older in life, there’s going to be less boundaries and more decision-making,” said Kekama Helm from the Queen Lili`uokalani Children’s Center (QLCC), one of the organizations that came to the Kualapu`u Recreation Center for the transition day.

Jana Sasada from the organization Alu Like oversaw the event, a responsibility she took on by wanting service providers to participate.

QLCC led the lifeboat exercise, firefighters put together an obstacle course, and the students received health screenings as part of the day’s events that teachers said help bridge the gap between the social and academic worlds.

The transition day has been a tradition for years, but now it happens three times a year. This way the students can get to know each other better throughout the year. Friday’s meetup was the second of the school year. Middle School representatives will be present at the final one, which will be April 29 and will serve as the big rite-of-passage for the students in their final days of elementary school.

Teacher Heidi Jenkins said many students who don’t quite click with their classmates often find friends during these events.

School renewal specialist Alison Place said the event was a grassroots effort by sixth grade teachers who noticed students had transition issues going into seventh grade, especially between those coming from different areas of the island.

“People from the middle school said they don’t see as much conflict as they did before,” she said.