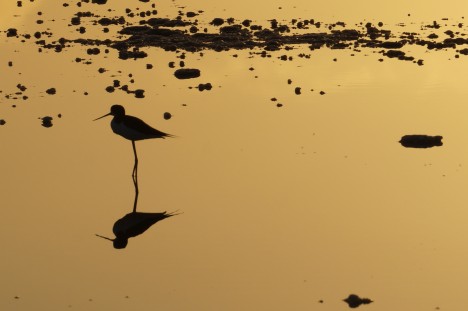 As part of the 115th annual National Audubon Society’s Christmas bird count, a small group of dedicated volunteers set out to conduct a survey of the bird population on Molokai. The national survey is both the longest running citizen science survey as well as the longest running wildlife survey to date. The local survey is organized by Arleone Dibbon-Young, a Molokai-based wildlife biologist. She has been instrumental in not only protecting the endangered Nene population on Molokai, she has also compiled years of data on Molokai’s avian population and has a wealth of knowledge regarding Molokai’s history.

Early on the morning of Dec. 18, veteran and first-time volunteers hiked down the Kalaupapa trail in wet and muddy conditions to conduct the survey. In the settlement, the group was met by Eric Brown, a marine biologist at Kalaupapa National Historical Park. Eric’s wealth of knowledge about Kalaupapa’s storied and tragic history was greatly appreciated by all the volunteers. The group spent the day traveling to different sites on the peninsula and to Kalawao as well, even scrambling down steep rock faces to get a better look into sea caves that might serve as nesting sites for seabirds. Using binoculars when necessary, volunteers scoured the landscape looking for birds in different types of terrain to add to the tally.  Despite working in windy, overcast and rainy weather, the volunteers were rewarded, even seeing a Laysan Albatross which is a rare sighting for the island, as the main breeding population resides in the Northwestern Hawaiian Islands. 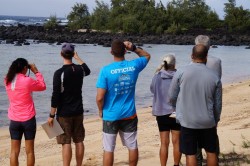 The survey continued the following day, as volunteers searched some rather unexpected locales, including the waste water treatment plant, Kaunakakai stream, and the fields of Home Pumehana. Some species encountered in the Kohea Wetland at Seaside Place included the Pacific Golden Plover or Kolea, which make annual migratory journeys of over 2,000 miles between their breeding grounds in Alaska and their winter homes in Hawaii and other islands across the Pacific. The Bristle Thighed Curlew or Kioea, the official bird of Molokai, was also spotted — another migratory species that breeds on the Alaskan tundra and winters in Hawaii and throughout the Pacific.

On Saturday, the survey continued in the Molokai Forest Reserve and the Kamakou Preserve. Several species of endemic honeycreepers were sighted, such as the Amakihi, I`iwi and `Apapane. The plumage of these birds was valued highly by Hawaiians as they were used to make `ahu`ula (feather capes) and mahiole (feather helmets) for ali`i as well as lei hulu (feather lei). The Ohia Lehua blossoms were in bloom and serve as a valuable food source for the endemic honeycreepers. The birds feed on their nectar and are attracted to their beautiful red flowers, and as a result of the bloom, volunteers counted one Amakihi, three endangered I`iwi (with several more heard but a positive identification was not possible) and 32 Apapane, which, according to Dibbon-Young, “was a high count for the species.”

The survey is important because it gives researchers firsthand information regarding the populations of both the endemic and introduced bird species on Molokai as well as across the nation. Armed with such information, wildlife biologists are able to get a more accurate picture of bird populations and whether or not conservation efforts are adequate.