Chinese New Year with the Chungs 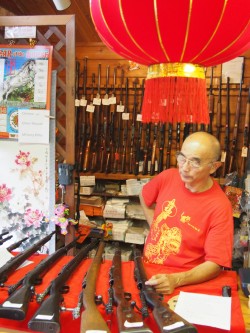 “It is a very inspiring saying,” she said. “It reminds us how lucky we are to be Chinese and to have this tradition to observe.”

For Mrs. Chung and her husband Mel, this time of the season means good food, good company and a time to celebrate their heritage. Red and gold lanterns, banners and decorative firecrackers adorned their business, Shop 2 & Beauty Salon. Guests were welcomed with Chinese music and lucky candies, and left with knowledge in rifle history and best wishes, starting the New Year off with a bang.

Gunsmith Mel Chung displayed some of his prized rifle collection during Friday’s New Year celebration and Gun Show. Rifles from China, Mexico, Peru and Germany, dating from 1900 to 1945, laid neatly in a row on the front counter.

While pointing out unique features and picking up a rifle to highlight the story told in its materials and etch marks, he recited how emblems could reflect the area and militia the gun came from as well as how firearm quality could explain more than just the time period.

“Why is this one made much better than this one, even though it was made in the same factory?” Mel asked a visitor, gesturing toward two German rifles made in 1941 and 1944. “The Germans were losing [WWII] badly! They were cranking [guns] out because they were desperate.”

Mel said he has always had an interest in collecting firearms.

“They’re historical, they’re not going to be made anymore,” he said. “They’re like a snap shot in time when they were made under those conditions and that’s what makes them interesting to me.”

While he and Mrs. Chung have had gun shows in the past, this year they decided to display Chinese and other military rifle models, tying in the event with the New Year celebration.

“Every year when the Chinese New Year comes around, we do a celebration and decorate our shop with lanterns,” said Mrs. Chung. “The Chinese culture is always very colorful and the red and gold makes everybody feel energetic.”

The Chinese New Year, observed on Jan. 31 this year, marks the start of the new lunar cycle and the approach of spring, according to the Chinese Historical and Cultural Project. Each year represents one of the 12 zodiac animals, following the sun’s path through the cosmos. 2014 is considered to be the Year of the Horse, which guides the year’s horoscopes.

According to Mrs. Chung, the New Year is a time to celebrate and bring prosperity to loved ones. Children receive gifts and red envelopes filled with money and families reunite to have fun and feast. Mrs. Chung added that her daughter and son-in-law will be visiting from Oahu the following day to honor the New Year.

“Chinese New Year usually means reunion and it is the most significant of the year,” she said. “Going back home means going to your foundation, the source of comfort, and I think it’s priceless.”

This year, Mrs. Chung said she wishes for good health while Mel said he hopes for more business. He wants to thank his loyal customers and enjoys the opportunity to meet new people.

“I think it will be a wonderful year for the Molokai community because the horse represents achievement,” said Mrs. Chung. “We all will gallop to our goals and achieve what we long for. I wish everyone will find wonders in the Year of the Horse.”