“We’re all here because we have one thing in common: we love our children,” said Kahu Jimmy Duvauchelle, who came to help bless the new location last Friday. “We wanna give them nothing but the best.”

CFS, which helps families through serious issues that include domestic violence and sexual assault, went from the small building in Kualapu`u to a location next to Hometown Goods on Kaunakakai’s main street. However, the office space was only separated by partitions and provided no privacy for families, explained CFS Island Manager Titi Hernandez. So this past summer, staff members finally moved the organization to its current location next to Bank of Hawaii.

“We have individual rooms, we have doors we can actually shut,” said Hernandez of the new office. “… It makes a huge difference. Our clientele is so much more comfortable with it.” 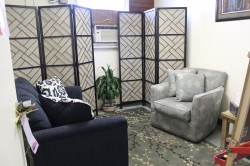 Families can meet with CFS staff in the new, more private rooms of their new office. Photo by Colleen Uechi.

The new office includes play areas for children, spaces for supervised visitations and rooms for counseling families and victims. CFS used to fly a therapist in to Molokai for counseling, but now the organization has a therapist on-island. Having members of the local community be a part of CFS is key for the program, said Hokoana.

“It’s so important to me that [our staff] be of this community,” she said. “It means a lot that … they connect to the community and have that vision for a better future for our kids.”

According to its website, Child & Family Service (CFS) was founded in 1899 and is “Hawaii’s oldest and largest nonprofit human service organization,” with locations on Oahu, Maui, Hawaii Island, Kauai and Molokai. Hernandez said that Molokai’s CFS offers a variety of services, including parent education programs, counseling sessions, domestic and sexual violence advocacy, a 24-hour hotline, food bank and community closet. The organization also plans to work with the Children’s Justice Center in the future to help victims of severe child abuse.

Although CFS is expanding its services, Hokoana said the challenge is conveying CFS to the community as “a safe place that people can come to without stigma.” Many people are mandated by the court to work with CFS, but Hokoana hopes that, through CFS, people will decide for themselves that they want a different life.

“Real change won’t come by mandate,” said Hokoana. “Real change will come because there’s a reason to change your choices. There’s someone in your life that really motivates and inspires you, and it’s someone that you can say, ‘Wow, he did it, or she did it, and I can do it, too.’”