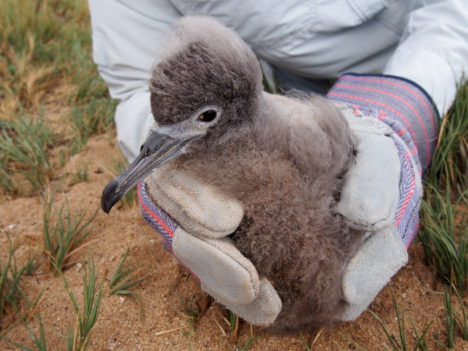 Hundreds of these fluffy Wedge-tailed Shearwater chicks received a metal identification band on one leg during an annual banding effort two weeks ago at Mo`omomi. Hatched over the summer in deep burrows in the ground, these young birds will grow up to spend most of their lives at sea, coming ashore only to nest.

The Mo`omomi area has become one of the most populated colonies in the state, growing from just a few nests in the last 90s to more than 1,000 nests today. The annual banding project helps researchers track populations and learn more about the indigenous seabird species. The banding is led by Maui Nui Seabird Recovery Project, in partnership with The Nature Conservancy and Molokai Land Trust, assisted by local volunteers.