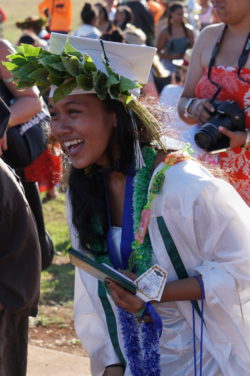 With their May 21 ceremony held for a second year outdoors on the football field, the Molokai High School Class of 2022 celebrated overcoming the challenges the past few years have brought and looked toward a bright and diverse future.

Nearly half of the 77 members of the class have already taken college courses. Two students — Shia Bush and Summer Stone-Sardinha  — not only received a high school diploma but also already graduated with their associate degrees from the University of Hawaii Maui College. Six students received the Seal of Biliteracy, showing proficiency in both English and Hawaiian languages.

Getting back to sports competitions after COVID restrictions, the class boasted state qualifiers in baseball, judo, swimming, cross country, girls volleyball and wrestling.

“Three of their four high school years have been disrupted by COVID,” said Principal Dr. Katina Soares in her graduation message. “So when I say I had the privilege of watching them grow up, much of it has been through a computer screen and emails.”

She said though COVID-19 brought many challenges, the class ultimately showed resilience to conquer the obstacles put in their way, and the school “collectively did what it took to come back together.”

“I know our high school career wasn’t the way we planned it to be, but look, the day we dreamed of has come,” class president Jordyn McCutcheon told her classmates during her ceremony speech. “Our journey has been one to remember. Living through a pandemic is totally life-changing. Well, life-changing is about to hit a new meaning.” 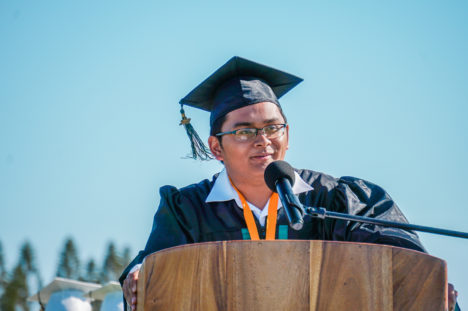 One senior graduated with a special distinction.

Macalalad, who hails from California and spent the past year on Molokai, brought laughter to his classmates and ceremony attendees as he recalled stories from his time on Molokai. 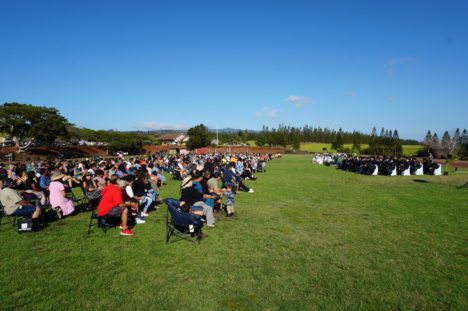 “In the year I’ve lived here, I’ve learned a lot about this island,” he said. “For example, apparently, ‘talking story’ just means ‘talking,’ and pulling up an anchor from the bottom of the ocean is a lot harder than it looks. And most importantly, Hawaii is not just a tourist destination. It’s a model for how the rest of the world should be. And I’ve really learned to cherish that — and Molokai.”

“No matter what happens in the future, I hope we are still able to express ourselves in our own special way, whether it means staying or leaving, helping the family, working, going to college, or even the military,” Simon told her classmates. “Let’s be as glorious as we want to be, carrying the aloha of our community everywhere we go.”

Quoting Bob Marley, Grik-Lani reminded her class, “In this great future, you can’t forget your past.”

“Molokai will always be here for us to come home to, so now it’s our chance to get out in the world and begin a new adventure,” she said. 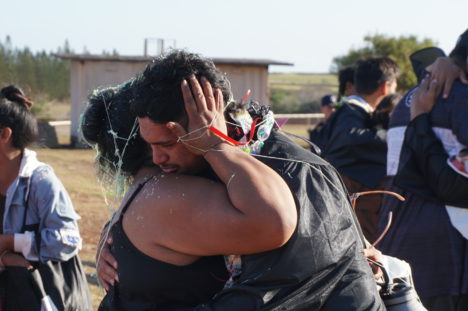 The ceremony included Thalia Meyer singing the Star Spangled Banner, ‘O Kina I Ka Malama students singing Hawaii Pono’i, the class song, a toss of their caps after receiving their diplomas, and a jubilant exit to be joined by their families and friends on the other side of the field, where the graduates were piled high with lei. Students were permitted to invite up to six guests each to the ceremony, an increase from last year’s two guests. The open-air venue favored safety, and guests were asked to either pledge full vaccination status, a negative test within 48 hours of the ceremony, or a doctor’s note proving a positive COVID test within the past 90 days.

Macalalad shared a story of being amazed by the brightness of the stars over Molokai while outside at night with some classmates – an experience he never had growing up in light-polluted Southern California.

“I know that a lot of us are going to be leaving the island after graduation,” he said during his speech. “But tonight, if it’s not too cloudy, look at the stars and appreciate what we have on this island. Don’t take it for granted. Cherish this place. I know I will.”