Cheers to the Masters 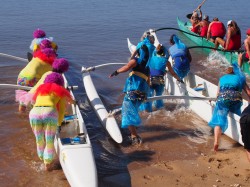 There’s only one event in Hawaii that you’ll see teams of genies, clowns, American Indians, devils and cats jumping into outrigger canoes and paddling away along the coastline. It’s the annual Molokai Master Blasters, a race for older athletes featuring the sport of paddling, the art of drinking and the fun of dressing up.

“We’ve always wanted to do this — it was our goal race,” said one member of the Pu`uloa Puddy Cats of Oahu, participating in the 28th annual Master Blasters for the first time. This year’s race attracted 23 teams from around the state, including eight from Molokai.

“You can let your hair down — it’s not a serious race,” said another Puddy Cat.

But for others, the competition was real and fierce.

One paddler of the Molokai Etes, the reigning champions on the women’s side, called it “harder than the channel race.”

A men’s team from Waimanalo dressed as the Tutus from The Cab taxi company commercial featuring the business’ number, 422-2222. Sporting wigs, mu`umu`u, jewelry and make-up, the team said they’ve paddled in Master Blasters for four or five years. 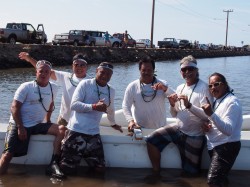 “We paddle for one hour and drink for five,” they laughed before the race. Their routine also included practicing make-up application. The

Tutus said what brings them back every year in the fun and camaraderie, adding “Molokai does a [heck] of a job putting this on.” Overall, the team said they put their energy into their costume creativity.

It turns out their efforts were well-directed, claiming first place in the men’s division costume contest following the race. On the women’s side, Coco’s Genies of Molokai won best-dressed.

The men who did win the race, though, had a few years to make up for. The men of the Molokai Canoe Club sought to reclaim the title they lost a few years ago — and, sporting their club’s simple shirts for a costume — paddled into first place overall.

As they neared the finish line at the canoe shack by Kaunakakai Wharf, steersman Ed Misaki could be heard yelling encouragement.

Each team is made up of six men, age 40 and up for a total crew age of 300 years minimum, or six women, 35 and up totaling at least 250 in age. The race starts from Kawela Rice Patch and ends at Kaunakakai Wharf. The six-mile course is interrupted by four stops at which teams must jump ashore to chug beers — four brews total for women and six for men — before leaping (or falling) back into their canoes. In addition to the usual rules of “you cannot spit out more than you swallow” and others, race director Liko Wallace emphasized the importance of paddling around the outside of shoreline fishponds to avoid damage to canoes.

Wallace said the Master Blasters tradition began with a group of paddlers holding a race they called “Dolla Dolla” because of the money they pooled together to buy beer afterwards. The idea to make it a masters age event started after they competed in an age-specific race on Oahu — and then a novel notion dawned on them: make a race that combined both elements.

Molokai is still the only place such a concept can be found, said Wallace.

“The race itself is a killer,” said Wallace. “A lot of paddlers are drinkers but when you put the two together it’s like, ‘oh my gosh!’”

Today, the Master Blasters is the Molokai Canoe Club’s largest fundraising event — but Wallace said it also serves to boost local economy from visiting participants. She added that while some competitors have been racing in the event for more than 20 years, others continue to learn about it through word of mouth. Because there’s no website for the race, Wallace said some admit to searching “high and low” to get information on how to join the fun.