On floodlit high school fields across the country, fans pack the bleachers to hear the clash of football pads, the chants of cheerleaders and the trumpeting of the band on a Friday night.

For Nichol Kahale and her husband Mike, it’s a scene they envisioned for Molokai High School years ago. This summer, Kahale revived cheerleading on Molokai after the program’s 13-year absence, and with football well established on island, they’re one step closer to that “Friday Night Lights” dream.

“Back when I was in school in the 80s we had the whole shebang,” said Kahale, who attended both MHS and Kamehameha Schools. “The bleachers were filled, [we had] band, cheerleaders.”

For the past five years, Kahale had been searching for someone to restore cheerleading but could never find an advisor and was told there wasn’t enough money. Students had also been expressing interest.

Sophomore Star Kaahanui said she and her sisters got interested in cheerleading from watching movies.

“The stunts attracted me to cheerleading,” she said. “And the spirit that it brings back to the school. That’s what inspired me to join this cheer squad.”

They began asking the school for a cheer program when Kaahanui was in eighth grade but, like Kahale, found there was no one to coach it. Up until that point, Molokai was the only school in the Maui Interscholastic League without a cheerleading team, said Kahale. 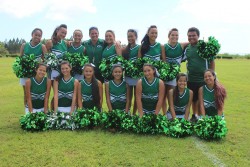 Kahale finally decided to take charge and formed the Cheer4Llife program under the federally funded 21st Century Community Learning Center grant, which MHS received earlier this year. While Kahale doesn’t have a cheerleading background, she’s joined by assistant coaches Melinda Yamashita, Cora Eustaquio and Louise Manley, all of whom have cheerleading or dancing experience.

The Molokai Cheer and Dance Squad practices nearly every day, learning dances, memorizing chants and stretching for basic stunts like the splits. While Kahale said she’d like to find a gymnastics coach to teach them tumbling and more complicated moves, for now they’re following the low-risk route.

Manley said cheerleading is “a very disciplined sport” that involves both physical and emotional investment.

“You’re cheering standing up for two hours [straight] at a game, and your focus is to try to engage the crowds to work with you to bring spirit,” she explained. “That’s emotional energy that has to be put out there, and you have to have physical endurance.”

Kahale said they’ll be cheering at home football and basketball games and will fundraise for one away game.

The coaches put a focus not only on cheer and dance but also teaching the team confidence for the classroom and the community. To earn their pom poms, they had to memorize portions of the Cheer4Life creed, which emphasizes authenticity, commitment and perspective.

“We’re not supposed to just bring our good attitude to the field,” said senior Misty Parker. “We’re supposed to carry it outside and get people around us to be good spirited and happy, at school, at home.”

It’s been a test of confidence for the squad. Parker added that when they tried to lead out cheers at a football preseason game, the crowd “just looked at us.” However, fans later got in on the cheers and Kahale added that people approached her after the game wanting to get involved.

“Being able to go in front of a crowd … has built their confidence,” said Kahale. “I’ve seen they’re much more assertive in having a conversation with me. … Being able to communicate verbally and express themselves is a life skill that they’re gonna need beyond high school.” 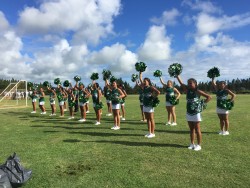 The squad has been preparing dances and chants in practice. Photo by Colleen Uechi.

The 21 girls and one boy on the squad want to help boost student attendance at games, which they feel has been low. Manley and Kahale said they hope to hold a pep rally this week in preparation for Molokai football’s big home game on Sept. 19 against Seabury.

“I wanted to be a part of bringing spirit back to our school,” said sophomore Lahilahi Manaba. “It’s something new and I never know when I’m gonna get this opportunity again.”

Cheerleading was revived 13 years ago, but it only lasted for about a year, said Kahale. While she doesn’t plan to lead the program in the long-term, she and the coaches are working to give it a strong, community-supported foundation for the future.

Athletic Director Lee DeRouin said the squad has “proved they can do it,” and there are plans to include it under the athletic department next year. The squad is already following Department of Education policy for student-athletes, including GPA requirements.

“Cheerleading is really a small part of what I see this doing for the girls,” said Kahale. “It’s about self-esteem and confidence. … I tell them that they’re ambassadors of goodwill and they’re actually the connection between the student body, the athletic department and the community.”