Wa`akapaemua Canoe Club’s Team Boomski wahine paddlers placed 10th out of 69 crews at the 35th annual Na Wahine O Ke Kai race last Sunday. Paddling 42 miles from Molokai to Oahu against top teams from around the world, the open women’s Molokai crew crossed one of the most difficult channels in the state in 6 hours 46 minutes 11 seconds. They met their goal of placing in the top 10, improving from last year when they finished 14th.

“The biggest struggle is trying not to hit the wall,” said Team Boomski paddler Teon Simmons. “You cheer on your teammates and you try to get into your Zen mode–whatever you got to do to get it done.”

Maui’s Team Bradley came in first for the eighth time in nine years.

Crews gathered at sunrise Sunday morning at Hale O Lono to take to the water. Committee member and race official Rosie Lum said each year, changing winds and tides makes the Kaiwi Channel unpredictable and challenging for the athletes. This year was no different.

“This year is going to be hard work because the ocean is calm and the girls are going to be doing a lot of hard paddling,” Lum said Sunday morning. “When the ocean is alive, you’ve got bumps to catch and it eases the constant paddling but today, it’s calm and hot so the girls have got their work cut out for them.”

Carleen Ornellas, a paddler for the Kailua 50s team, said the irregular channel conditions cause teams to shift gears every year, but she welcomes the challenge.

“We’re training year around getting ready for this,” said Ornellas. “We all just love the sport and we’re all very supportive.”

Ornellas said she has crossed the channel 33 times, participating in one of the first wahine paddling clubs to cross the channel over three decades ago. 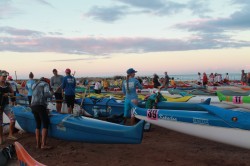 Sixty-nine crews gathered in the early morning at Hale O Lono to race across one of Hawaii’s toughest channels. Photo by Laura Pilz

Before the annual tradition began, paddle club coaches and officials thought the channel was too dangerous for women. Men had been racing across the channel in the Molokai Hoe since 1952. It wasn’t until 1975 that two Oahu women’s crews — Onipa`a and Healani — proved skeptics wrong after competing in unofficial competition. Four years later, 17 wahine crews competed in the first official Na Wahine race.

“We didn’t know what to anticipate out there,” said Haunani Lods, an original paddler for Onipa`a in 1975 and now a race committee member. “We trained for it but when the day came, I said to myself, ‘Wow, we are really going to do this?’”

Today, the race attracts veteran and novice paddlers across the state and around the world to become part of the legacy.

“I’ve been paddling for 10 years but this is my first time coming to Molokai,” said Motahi Christelle, a paddler for Tahitian team Puna`auia Va`a. “I’m excited to be here because our country is so small and…we don’t have as many teams and because this race is only for women, we are proud of it.”

Australian paddler Jane Hall said she’s been racing in Na Wahine since 1998 and looks forward to it each year.

“Personally, and I think for a lot of my crew, the concept of flying to [Oahu], getting a one way ticket to Molokai, then paddling back is an awesome experience,” she said. “That makes it magic.”

Though teams are here to compete just once every year, their shared passion for the sport creates lifelong friendships.

“[Over the years] we’ve met so many wonderful crews and wonderful, strong women,” Lods said. “Women bond…You see that when they meet each other here every year.”

In the future, Lods said she hopes to see more participants and more countries represented but is proud to see how far the Na Wahine has come.

“It is a great experience to see it come full circle and the race really happen to be part of it for 35 years,” she said. “It’s a tremendous feeling.”