Hawaii’s Department of Land and Natural Resources (DLNR) is working to protect watersheds, native species and agriculture with proposed amendments to their administrative rules. The rule changes aim to prohibit the transport and release of introduced invasive wildlife, including mongoose, ants, snakes and ungulates, said Laura Goodmiller of DLNR Division of Forestry and Wildlife.

“Introduced species negatively affect Hawaii’s environment in a variety of ways, including predation and competition to indigenous species, damage to watersheds, the spread of pathogens and diseases, and threats to agriculture,” she said. 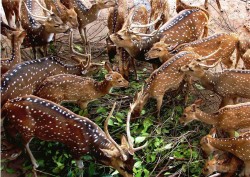 Under the proposed rule changes, transport and release of axis deer will be illegal.

Goodmiller and other DLNR representatives presented the changes at a public forum on Molokai April 3. The deadline for submitting testimony is April 20.

The amendments broaden 2012 legislation that prohibits the possession, transfer, transport or release of axis deer between islands. Goodmiller said the proposed prohibition extents to all introduced wildlife and does not apply to only inter-island transport and release.

“For example, Molokai does not host an established population of coqui frogs, a species of introduced wildlife, and the proposed amendments can serve as a tool in preventing such,” said Goodmiller.

She said the proposed rule amendments do not affect existing administrative hunting rules.

The entire chapter with proposed amendments is available at www.dlnr.hawaii.gov/rules. Testimony can be emailed to Lauren.E.Goodmiller@hawaii.gov or mailed to Department of Land and Natural Resources, Division of Forestry and Wildlife, 1151 Punchbowl St., Room 325, Honolulu, HI, 96815.