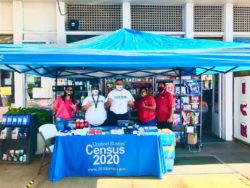 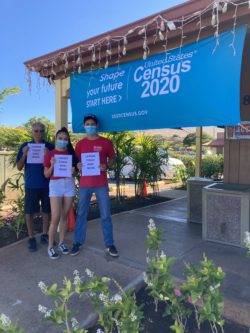 Time is running out to complete the mandatory U.S. Census, and with Molokai’s response rates critically low, officials held two incentive events on the island last weekend. Last Friday, residents who hadn’t yet completed the census could receive a $5 gas card to Rawlins Texaco, while on Saturday a sweet deal offered a Kamoi Snack N Go gift certificate for answering census questions.

The census, which takes place every 10 years, counts residents based on age, race and area of residence. Guided by census data, the federal government allocates about $6.75 billion to states and communities across the country each year. For Hawaii, programs like MEO, SNAP, Head Start, public housing, emergency services, Medicare and infrastructure projects like roads and schools are all funded based on census participation, according to local census officials.
The count process began this spring and the deadline for completion is Sept. 30.
“The U.S. Census is so easy and it takes less than five minutes,” said Kimberly Svetin of Kamoi Snack N Go, which hosted Saturday’s incentive event. “24 days left [as of last Sunday]…Let’s make sure Molokai counts!”

U.S. Census Partnership Specialist Sharlette Poe, who was on Molokai to run the weekend’s census drives, said completion is important to bring resources to Molokai.

“Molokai has your own unique needs, you want to make sure your community gets…
federal funding,” she said during Rawlins’ Friday event. “The only way we can do that is if you folks say where you folks are, how many of you folks need what resources, and you do it by responding to the census. It’s fast, it’s easy, it’s safe.”

For the first time, race and ethnicity can also be declared on the census.

“Our declaration of ourselves as Native Hawaiians helps bring resources specifically for those programs,” said Poe. “Kupuna to keiki… we have kupuna programs we need, we have keiki programs. We gotta know how many of them [in those age groups] there are and where they live.”

The information requested by the census covers how many people were living in your household as of April 1, 2020, their names, ages, sex, relationship to each other and their race and ethnicity.

Molokai’s census participation has been lagging since the beginning. And that could mean big financial losses for the island, officials say.

For the east half of Molokai, including Kaunakakai, the self response rate is 33.5 percent as of last Friday, while the western half of Molokai is at 24.7 percent. Islandwide, the response rate improved between two and three percent since door to door followups over the last month, according to census data that maps hard to count areas.

Svetin said about 20 families registered at Saturday’s Kamoi Snack N Go event. Numbers were not available for Friday’s drive as of press deadline Sunday, but Lori-Lei Rawlins-Crivello of Rawlins Texaco said “we had a great turnout from the community.”

If you haven’t yet completed the 2020 Census, you can still do so by Sept. 30 by visiting 2020census.gov, by phone by calling 1-844-330-2020, by completion of the packet left at your door by census takers, or giving your information to census interviewers that visit your home.