The Manley ‘ohana of Molokai is famous for wrestling. For many years Randy, along with his wife Louise, has coached Molokai wrestling at the high school and club level and their five children were all were coached by their father and had great success. Sons Colton, Clinton and Caele, and daughters Charisse and Cendall have all wrestled for the Farmers of Molokai High School.

In 2016, Cendall won a Hawaii State Wrestling Championship in her senior year and continued her wrestling career at Liberty University in Lynchburg, Virginia. Last month, she won her fourth straight National Collegiate Wrestling Association Championship in Allen, Texas and was named the women’s tournament’s Most Outstanding Wrestler.

She scored a 6-0 decision over Megan Thomas of women’s team champion Schreiner University in the 155-pound final to lead Liberty to its second straight fourth place team finish. Lady Flames second-year graduate and Cendall’s older sister, Charisse, won the 143-pound weight class last season. This year at Nationals, she was doubled up by Aliyah Yates of Big Bend Community College, 4-2 in the 136-pound final and got a silver medal for second place. Both girls received All-American honors.

“This has been an amazing experience and words cannot express how thankful I am to be able to have shared this journey of wrestling at LU with my sister,” said Cendall. “We were able to have nine women compete at the NCWA national tournament and we had four All-Americans: one champion, two runners-up, and one third place. I was named a four-time National champion, only the second for Liberty University. It was so much fun and I’m thankful that my parents and brother, Caele, were able to be there for it. Our goal of was to bring glory to God, wrestle with all our hearts, and represent our school and community well, which we accomplished with pride! A big thank you to all my ‘ohana back home on Molokai for all your love and support!”

Charisse was proud to wrestle alongside her little sister.

“Our women’s team brought the biggest team yet to Nationals with nine girls total,” she said. “Our theme throughout this year has been ‘strong and very courageous’ from Joshua 1:9 and that truly came into fruition as we wrestled and competed.”

All the Manley siblings have always wrestled with skill and sportsmanship, taught to them by their father, and Risse left it all on the mat at nationals.
“I gave it everything I got, had a glorious last match but unfortunately it didn’t end up the way I had hoped,” she said. “I know that God’s plan is sovereign over my own and thus, although I was sad about taking second, I could walk off that mat knowing I gave it everything I possibly had.” 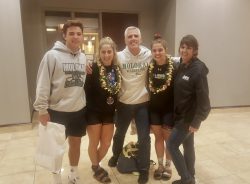 Molokai Wrestling Head Coach Randy was proud of his daughters.

“The trip was great, and it was great to see Cendall win her fourth title,” he said. “She is one of just a handful who are four-time champs. It was a very special time for me and Louise. Risse’s second place finish was a tough 4-2 battle that was one of the best matches of the tournament and both girls represented Molokai well.”

“Wrestling alongside my sister as she won her fourth National Championship is something I can’t even describe,” said Charisse. “I couldn’t be prouder of her and the woman that she is on and off the mat. She deserved that victory and represented God, Liberty University, our family and the Molokai community so well.”