For 80 years, Molokai Drugs has doled out over-the-counter remedies to thousands of island residents. This year, however, the island’s only pharmacy is tending to the health of a unique customer: Molokai High’s ailing fleet of school buses.

To celebrate their milestone anniversary, the owners of Molokai Drugs donated a new 14-passenger bus to the high school, which spent nearly $15,000 last year in bus repairs alone. 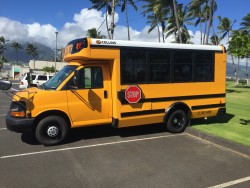 To thank the community for 80 years of aloha, Molokai Drugs donated a much-needed bus for students. Photo by Lee DeRouin

The brand-new vehicle, which will be used on Maui, is a start to replacing a collection of buses that over the years have cost the school thousands of dollars, delayed numerous trips and limited the number of students and equipment that teams can take off island.

The Mikami family, owners of Molokai Drugs said they wanted to commemorate 80 years with a more permanent gesture than a party.

“The people [of Molokai] have been good to us,” said pharmacist David Mikami. “And this the way we’re talking about giving back.”

One of the longest standing establishments on the island, Molokai Drugs has been servicing the community since 1935, when Richard Sakata first brought his pharmaceutical training to the island.

“The physicians on Molokai needed somebody to run their medications, and so he came over on a Young Brothers barge from Honolulu,” said pharmacist Jon Mikami. “… He almost turned around and went back. But someone in medical school told him, ‘Richard, they need you.’”

Sakata, who had passed the state board exams despite not attending pharmacy school, decided to stay and set up shop in downtown Kaunakakai. He and his wife Betty, along with resident Emma Lau, started out as the sole employees of the pharmacy. The Sakatas filled prescriptions—occasionally making home deliveries when necessary—and provided services such as Kodak film development.

“They were caring people, and they were really humble,” remembered Judy Mikami, the Sakatas’ only daughter. “My dad was kind of quiet, had a dry sense of humor. Mom was the pistol-packing momma. She was the outgoing one.”

Over time the business expanded and so did the family of pharmacists. Judy married David Mikami, who became the island’s next registered pharmacist. His younger brother Jon Mikami was the third, and David’s daughter Kelly Go followed. Judy said there are seven in the profession in their immediate family.

“We’re growing our pharmacists,” said Jon with a grin. 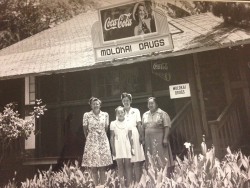 Molokai Drugs is part of a disappearing breed of pharmacies—they’re now the state’s oldest, independent family-owned pharmacy, said Judy. At their 70th anniversary, said David, “the store was just filled with flowers.”

“Flowers and bouquets all over the place, from not businesses but from people … because of the goodness of the Sakatas,” he said. “People still talk about them. Real true good people, my in-laws.”

It was that history of family business and service that led to the decision to help out MHS’s bus dilemma.

Buses on the Decline

Since the majority of athletic and academic competitions take place on Maui, MHS stores its buses at Lahainaluna High School. There are currently three available; the fourth one is unfit to drive, said athletic director Lee DeRouin.

Molokai students, coaches and teachers have endured flat tires, dead batteries and engines that overheat to the point where putting a foot on the gas pedal is uncomfortable, said football Head Coach Mike Kahale.

“This has been an ongoing issue ever since we started football,” said Kahale. “… We’ve had a couple times where we’ve broken down and had to take a break for half an hour.”

Kahale said teams have rented vans in the past, but said it costs more and limits both students and equipment. Plus, DeRouin added, vans “are always taken.”

“Especially in the wintertime, there’s tournaments that happen on Maui and we can’t find vans to rent for the kids,” he said. “We have to go about six months [in advance] to make a reservation.”

Kimberly Mikami Svetin, David and Judy’s daughter, said her son was once on a bus when a tire blew. The incident spurred a discussion within their family of how they could help the high school get a new bus. Not one for big celebrations, they decided to turn the 80th anniversary into a donation opportunity. 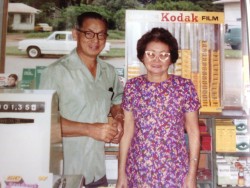 “We contemplated, should we have like a big giveaway?” said Judy. “We thought something more permanent that would benefit the kids. … We thought having a bus … would be more of a statement that my father would have appreciated.”

For the Mikamis, the new bus is something that has come full circle—they say it’s a gift for the community made possible by decades of support by the community. However, both they and MHS’s athletic department hope this is just the start of a Molokai school bus overhaul.

“What we really wanna do is, as soon as that bus is in use, we want people to donate to a second bus,” said Svetin.

DeRouin estimated that a new bus would cost around $62,000, plus $10,000 for shipping costs. As the campaign for a second bus commences, DeRouin and his athletes are already looking forward to taking the wheel of their new ride.

“This new bus coming already is gonna save on repairs [and create] safer transportation,” he said. “The kids are gonna ride a lot more comfortably.”