Celebrating the Class of 2018 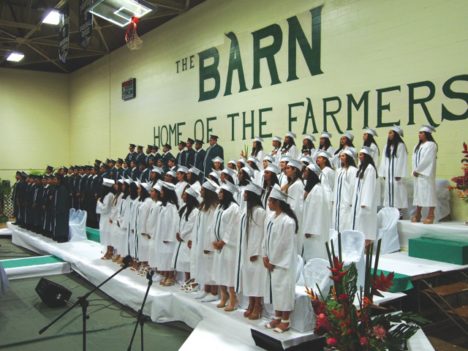 Nearly half of this year’s Class of 2018 graduated from Molokai High School with college credits under their belt. This and many other achievements were celebrated last Friday evening by the 85 graduating seniors along with their families, friends, teachers, community members and dignitaries.

“The details of every step along your future path are actually less important than answering the one very important question, which is, ‘What is your ‘why?’ What is your purpose? What is your motivation?’ she told the seniors. “Understanding your own personal answer to that is critical.” 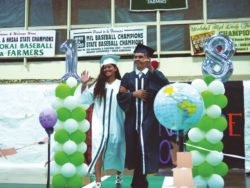 She shared when she was the same age, her plans fell apart and she was distraught. She said she later realized that “God had a different plan than the one I had made for myself.”

“The best way to find yourself is to lose yourself in the service of others,” said Gabbard, quoting Mahatma Gandhi.

“So as you venture out into the world beyond high school… whatever it is you choose to do, find a way to lose yourself in the service of others, always rooted in the values and spirit of aloha that you have grown up with and have been instilled in you throughout your life because that spirit of aloha,” she told the Class of 2018. “That motivation is the only thing that you need to be successful in whatever it is that you choose to do.”

“It is a feat to be able to balance both high school and college courses,” said Principal Stan Hao, adding that 45 percent of this year’s graduating class had already accomplished college credits, and nine have 10 or more credits.

Hao said this year, the school won the FAFSA challenge with the most Free Application for Federal Student Aid applications completed in the state. Completing the FAFSA is also a strong indicator of college enrollment. The class of 2018 also scored 12 percentage points higher on the science end of course exam than the class of 2017, according to Hao, which is also nine percentage points higher than the science scores in the entire Canoe Complex Area. Additionally, there were an unprecedented five CTE, or Career and Technical Education, honor diploma recipients, said Hao. Among this year’s graduates, two students, Cassandra and Romelyn Ragonton, also earned the first two diplomas with the seal of biliteracy, a new program that awards recognition for fluency in two or more languages. 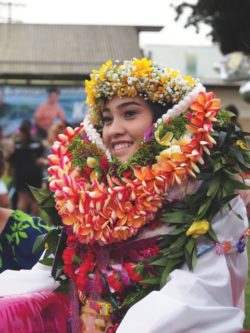 Athletically, during the seniors’ four years at Molokai High, they participated in 18 Maui Interscholastic League Division II team championships, five of them this year, said Hao. There were 33 individual state qualifiers among the senior class this year.

“Despite these accomplishments, we know that the best from you is yet to come,” Hao told the Class of 2018. “There are a myriad roads for you to venture down from today on that will be fueled by all of your goals, your dreams, your aspirations. For some of you, the road may remain on Molokai, yet for others it will be the road that takes you far away. No matter where the road may lead you, we at Molokai High School hope that you honor the past by remembering who you are and where you come from….”

It was also a memorable graduation for Hao himself, as he has announced his retirement after 33 years of teaching in Hawaii and the past eight years at Molokai High. Students, as well as Gabbard, recognized him for his service.

And while Hao closes his career, the journeys of the graduates are just beginning.

“We all sit here prepared to expand our horizons and utilize our skills to make a better us, a better Molokai and a better world,” said Cameron Tancayo, class president. “We’ve laughed and cried, but most of all spent some of the most memorable years of our lives together. Getting a good education was just a bonus. Our reward is the memories we’ve created and will cherish for the rest of our lives. This evening, the class of 2018 honor those who came before us by standing steadfast in the present and ready to embrace our future on our new journey.”