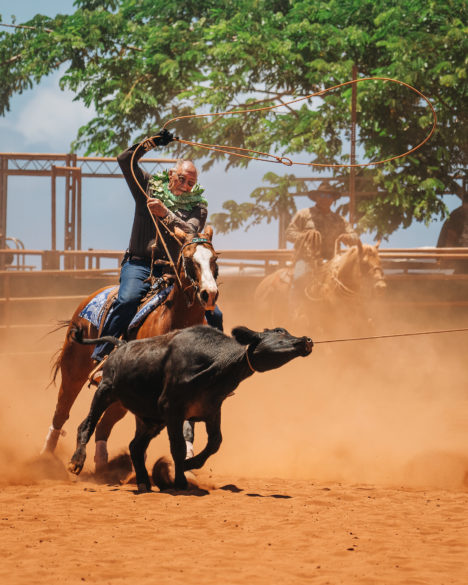 Paniolo young and old tested their skills and strength in the arena last weekend in the Molokai Paniolo Heritage Rodeo King Kamehameha Celebration at the Molokai Ranch Jimmy Duvauchelle Arena in Maunaloa.  From roping to barrel racing, calf tying to keiki roping, the event brought the heat, red dust and the best of the island’s cowboys and cowgirls, showcasing a long and rich legacy of paniolo culture.

The arena’s namesake, Jimmy Duvauchelle, also roped his last calf on Saturday, announcing his retirement from rodeo.  A Molokai Ranch paniolo for more than 50 years, Zhantell Dudoit Lindo described him as a “beautiful, God-loving, wonderful caretaker of our ‘aina and of our people.”

“Uncle Jimmy is not going anywhere, he’s just decided that he’s gonna hang up his hat and his boots in the arena and enjoy watching his children and his grandchildren continue on his great legacy,” Lindo told the crowd. “All of this right here that you see would not have been possible without Uncle Jimmy and his family.”

Duvauchelle said he knew when it was time to call it quits. 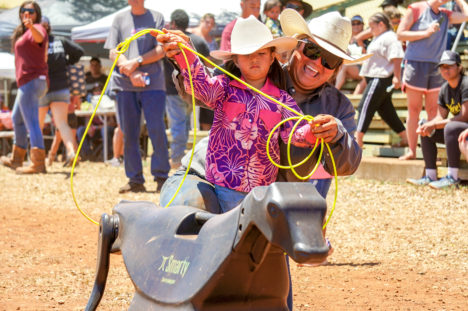 “When I came on Friday, my mo’opuna told me, ‘Get on the horse, Papa,” and I found out I couldn’t get on the horse without her help, I knew it was time for me to retire,” he said, his words filled with emotion after receiving lei and heartfelt hugs from his rodeo ‘ohana after his final run out of the chute. “Thank you, God, for giving me such a wonderful dream that I have fulfilled to my life in the paniolo realm.”

The event also celebrated two cowboys, Clifford and Porky Dudoit, who will join Duvauchelle in the Paniolo Hall of Fame, honoring Molokai’s own legendary work to preserve paniolo culture. Festival attendees also enjoyed live demonstrations and a lecture on making niho lio, or Hawaiian saddles, as well as food, entertainment and family fun. 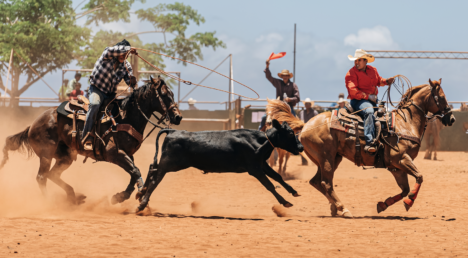