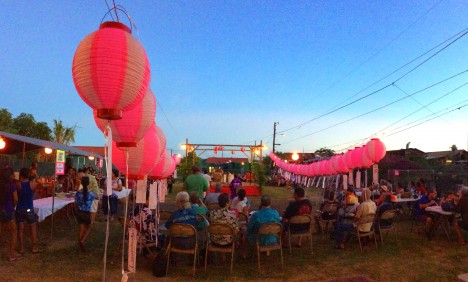 Last Saturday at Molokai’s Guzeiji Soto Mission, families gathered together to keep the memory of loved ones and the traditions of Japanese culture alive on Molokai. The island’s annual bon dance brought more than 100 residents and visitors together for lively drums, dancing and good food.

“It’s a time of celebrating ancestors who have passed on,” said Marge Bento, one of the event’s organizers. “We’re kind of partying with them.”

In an event repeated every summer in towns around Japan and places around the world, including Hawaii, community members smiled as they danced around the yagura, or bon dance tower, stepping to the beat of the heavily thumping taiko drums. Draped across the courtyard, pink and white lanterns fluttered with slips of paper, on which were written the names of loved ones who’ve passed away.

According to Reverend Shuji Komagata, from Oahu’s Soto Mission of Aiea, the origins of bon go back to India, with a disciple of Buddha named Mogallana. 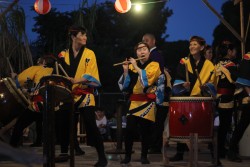 “Mogallana was known to have great powers to see. He had visions,” said Komagata. “In his dream he saw his mother suffering. She would try to grab food to eat and it turned to sand. She’d drink water and it turned to fire.”

When Mogallana asked the Buddha what was wrong, Buddha explained that the disciple’s mother had done some less-than-honorable things in her lifetime in an effort to provide for her son. Mogallana, however, could relieve his mother’s suffering by making food for the monks and asking them to pray for his mother, which he did.

“That selfless act of providing food for the monks to eat is a good deed, and by doing that he had dream that his mother was no longer suffering,” explained Komagata. “His reaction to this is that he began to dance around in joy.”

The taiko drums in today’s bon dances, he added, build up the emotion and excitement, a beat you can not only hear but feel deep within.

The Molokai bon dance culminated with a ceremonial burning of the paper strips at the end of the evening, symbolic of releasing the spirits of loved ones.