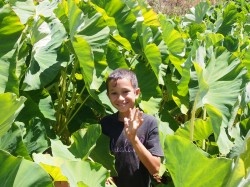 In the ancient days of Hawaii, each of the islands’ estimated 500,000 people would eat one seven- to nine-pound kalo plant per day, according to Alton Arakaki, a Molokai extension agent with the University of Hawaii College Tropical Agriculture and Human Resources (CTAHR.) Ancient Hawaiians carefully selected more than 300 kalo varieties to ensure food security and successful growth in many environments. Today, only about 70 of those varieties still exist — and without vigilant cultivation, that number may dwindle.

Last weekend, Molokai residents got the opportunity to select among more than 50 kalo varieties to grow in their own gardens, helping to carry on a tradition that can yield health, cultural understanding and economic benefits. The annual Taro Variety Field Day — which has been held for the past 20 years — offered educational lectures, taste testing of taro, poi and kulolo, a cooking contest, and harvesting your own kalo, free of charge.

Ducking among lush kalo plants growing taller than their heads, kupuna and keiki, kane and wahine all gathered to collect huli (base of the root used to replant) for some of the rarest taro varieties. The plants are grown at the Molokai Applied Research and Demonstration Farm at UH Maui Community College Farm in Ho`olehua.

“I loved it,” said attendee Chris Kaneakalau, leaving the field with his sons, laden with kalo plants. “It will be great to add to my collection.”

He said it was his first time attending the event, and enthusiastically called it a “good family experience.” He chose several varieties to bring home based on the taste tests.

“It’s exciting – it’s hard to pass up this opportunity,” said another attendee on his second trip to his car from the field carrying back plants.

Event speaker and cultural practitioner Miki`ala Pescaia offered advice on how to perceive the harvesting and growing process.

Arakaki said ancient Hawaiians carefully selected kalo varieties because “each one had something special.”

“This kalo deserves a chance to survive and you’re giving it a chance,” he said.

Arakaki added one of the day’s goals was to introduce local residents and farmers to kalo varieties they had probably never heard of before.

Historically, Arakaki said Native Hawaiians grew 100 percent of their own food, while today, we only grow about eight percent. Kalo represented a staple in the local diet. Arakaki said based on evidence pointing to the fact that people used to eat one kalo per day, ancient Hawaiians probably consumed 4500 calories per day – nearly double today’s recommended 2,000 calorie diet.  Yet, he pointed out, ancient Hawaiians were much more healthy and fit than today’s average population.

“It took a tremendous amount of energy to survive on the aina,” Arakaki said.

Dr. Emmett Aluli, a speaker at the event, added that a cardiovascular study of Native Hawaiians he conducted showed increased health by following a “pre-Captain Cook diet,” or what ancient Hawaiians ate. As part of the study, participants noted more energy, weight loss and decrease in conditions like high blood pressure when following the three-week trial diet.

The carbohydrates of kalo are digested differently from today’s popular carbs of rice and pasta, explained Aluli. As a complex carbohydrate, kalo is not broken down by the body into as much sugars as is rice.

Along with its health benefits, kalo plays a significant economic role in Hawaii today. Arakaki said four million pounds of taro is harvested annually in Hawaii, yielding $24 million in gross revenue as value-added products such as poi and kulolo. A total of 950 jobs in the state are created from growing taro. But he believes there is potential for much greater production.

Along with gaining knowledge of the historic and cultural values of kalo, attendees of the Taro Variety Field Day also got the opportunity to connect with local kalo experts and statewide groups such as the Taro Security and Purity Task Force.

Task Force member Penny Levin said the group was formed by legislation in 2008. The group of representatives from every island teach residents statewide about kalo growing and listen to people’s needs. The group works with UH CTAHR to conduct soil research, promote taro diversity and also plans to produce a video about the resurgence of kalo growing after a big decline in interest in the 1940s and 50s, she said.