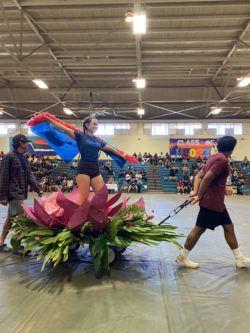 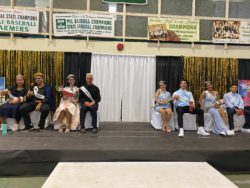 After three years of Homecoming being absent from the Barn, the competitive build-up between Molokai High’s students has returned. Homecoming is usually thought of as the start of school and sports, a dance, and school spirit. On the other hand, Molokai High brings it to a new level with the version called Green and White.

This year’s theme was Cartoony Tunes. Each class was required to choose a cartoon movie filled with fun musical tunes. The senior class of 2023 chose the film Rio. Class of 2024 went with a classic, Lilo and Stich. Sophomores, class of 2025, took it to the ocean with Surfs Up, and the freshmen selected Beauty and the Beast. The court, comprised of one prince and princess from each class, performed a medley of animated movies.

All participating students used their creativity to create a banner, floor show and un-motorcade. Each of these segments reflected the movies chosen. Floor shows included dance, skits, props, and well-detailed costumes. A panel of judges with teachers, community members and past Molokai High staff paid close attention to each detail of class and court performance.

The Green and White court found themselves in a pageant-like competition. Each court couple performed an introduction dance, reflecting a sport skit and an animated movie. They were asked questions like, “What do you find most difficult in school?” and “What does family mean to you?”

Amongst the Green and White festivities, the Farmers Football team was honored with medals for winning the Maui Interscholastic League Division II eight-man championship. Their undefeated MIL season brought Molokai its sixth title.

Concluding the festivities, the results of the hard work the students produced came in. Seniors Olapa Duvauchelle and Drayden-Sonny Garces took the Green and White, King and Queen win. The seniors also won the banner portion of the competition. A Lilo and Stitch floor show performance wowed the judges and allowed first for the Juniors. The freshmen took first for their Beauty and the Beast un-motorcade. Overall, the seniors won Green and White.