In the Ocatillo region of southern California, the Quechan tribe of Native American Indians has lived for thousands of years. The bones of their ancestors are buried in that ground, and it’s that earth that holds the prayers of their elders. So when Pattern Energy wanted to build wind turbines there several years ago, tribal leaders came together and decided to fight to protect the land. 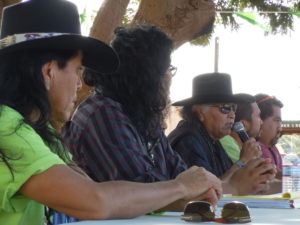 At last weekend’s Energy Festival hosted by I Aloha Molokai, several Quechan tribe members were honored guests and panelists. They shared a story with local attendees of their experience with Pattern Energy, the same company currently proposing wind turbines for Molokai — a story many Molokai residents say sounds all too familiar.

The Quechan united with neighboring tribes to stand against Pattern. But when the company offered each tribe millions of dollars in exchange for erecting wind turbines on their land, only the Quechan were left saying no, according to Quechan council member Virgil Smith. Though the tribe no longer lives on the land their ancestors occupied, which is now scheduled to become home to industrial wind energy generation, Smith said their status as a sovereign nation gives them some legal strength against the process.

The tribe has filed several lawsuits against the procedure Pattern Energy followed. Virgil’s father Vernon, a Quechan elder, said as a sovereign nation, the tribe is required by law to be consulted before any plans move forward on their lands. But he said they are often contacted after the fact, as was the case in Pattern’s proposal. He said their lawsuits have been fairly successful, with one currently in litigation.

“How do the people fight these big companies? The answer is, be united. Be strong. Believe in your people… Pray. Listen…” said Vernon. He encouraged Molokai residents to be aware of the laws and regulations that energy development companies are mandated to follow. He also advised to know your own history and educate yourself on what benefits are really being offered in exchange for turbine development.

Energy Education
The Energy Festival, the second annual two-day event held at Mitchell Pauole Center last Friday and Saturday, featured panelists from around the state, as well as the Quechan tribe members, educational workshops and exhibitors — all focused on educating residents about sustainability and renewable energy alternatives. Workshops included home energy-saving tools, photovoltaic options for residences and businesses and how to build your own low-cost solar hot water heater. 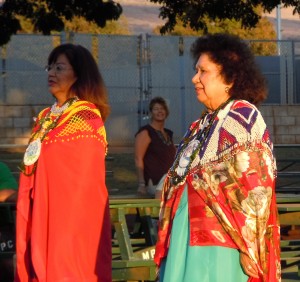 Women of the Quechan tribe share one of their traditional dances. Photo by Catherine Cluett

The event opened Friday evening with a welcoming ceremony featuring a cultural exchange of hula as well as Quechan tribe members sharing their traditions of song and dance.

Saturday’s first panel featured state and county officials discussing current trends and plans for energy in Hawaii. Doug McLeod, Maui County energy commissioner, said Mayor Alan Arakawa is not in favor of the cable coming to Molokai and Lanai. Robin Kaye of the group Friend of Lanai talked about how the new owner of Lanai says he wants to make Lanai a model of sustainable energy, which is causing mixed feelings among residents because they fear such abundant energy could cause rampant growth.

Another panel focused on energy from a Native Hawaiian perspective, discussing the importance of fighting for the next generation, establishing energy independence for each island and the importance of Native Hawaiians being recognized as a voice at the state level to influence energy decisions. The last panel looked at renewable energy alternative for Molokai and stressed the importance of starting somewhere by installing solar water heaters and photovoltaic panels on homes.

Range of Perspectives
Speaker Collette Machado of the Office of Hawaiian Affairs, which helped fund the event, echoed the Quechan and their resolve not to accept the benefits wind companies promise.

“[It takes] guts to stand up and say, ‘we don’t want anything you have to offer,’” she said, calling Molokai’s effort a “story of David and Goliath.” But she said I Aloha Molokai’s fight against “the giants… has garnered statewide support.”

While the tone of some at the event pointed fingers at the government, speaker Harry Kim, former Hawaii Island mayor and civil defense director, put things into a different perspective.

“If you blame the government, you have to blame yourself, too, because it’s our government — they got there because you put them there,” he said. “Our greatest failure is war,” he continued, explaining he meant it inclusively as the failure of agreement between people. “You have to empower yourself… you have to reach out to people who disagree with you.

“Say ‘our government’ and maybe we can work together to change.”

Exhibitors from around the state showcased renewable and sustainable energy companies and solutions, while attendees also enjoyed music, entertainment, food and raffle give-aways throughout the day.