Celebrating a Queen’s Love of Kalo 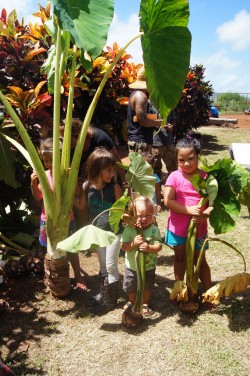 Young enthusiasts show off their harvest. All photos courtesy of Harmonee Williams.

At last month’s Taro Field Day, Molokai residents celebrated cultural and agricultural traditions, harvested their own kalo to grown in their backyards, and participated in a prestigious cooking contest honoring a queen’s commitment to taro.

The annual event offers community members a chance to learn about and be a part of efforts to preserve dozens of historic taro species, as well as taste test poi and kulolo made from varieties grown here on Molokai at the UH Maui Community College Farm in Ho`olehua. Attendees could also venture into the field after receiving a labelled map to select and harvest plants of their favorite varieties.

This year, the festival offered something extra special: Molokai was selected to host The Queens Challenge, which is held annually at various sites around the state in honor of Queen Emma Kalanikaumakaamano Kaleleonalani Na`ea Rooke. She recognized the value of the Hawaiian taro varieties and has written in detail on methods she used to produce large kalo.

Participants submitted their kalo to be judged for weight and quality. Kalo grown organically, as Queen Emma did, received additional points.

The Challenge is put on by statewide Taro Security and Purity Task Force, a legislatively established body of taro farmers and public representatives from each island with the goal to protect taro growing and develop economic, cultural and environmental considerations. Member Penny Levin said though the task force’s official mandate ended earlier this year, members put aside funding to ensure the Queen’s Challenge was held at least once on every island – and Molokai and Hawaii Island were the last.

“The purpose of the Queen’s Challenge is to raise awareness of the traditional Hawaiian kalo varieties but also of the care needed in growing kalo,” said Levin, via email. “Soil and water quality play a significant role in kalo health; attention to when the kalo tells you it is ready for harvest can be the difference between a loli or a starchy corm, all of which Queen Emma paid close attention to.” 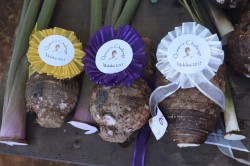 She added that returning to the high standards set by the Queen has created a higher valued market for taro farmers today.

Ioane Teves, of Ho`olehua, won both first and second place with the Piko `ula`ula variety at four and 3.25 pounds respectively.  Ioane grew his kalo with a mix of conventional fertilizer and organic inputs, including grass mulch, a good use of locally available organic matter, according to Levin.

“All of the winning kalo had good uniformity and passed a float test, which demonstrated a high level of quality starch in the corms,” said Levin. “Both winners demonstrated awareness by harvesting their kalo before 12 months which accounted for the high starch content.”

In the ancient days of Hawaii, each of the islands’ estimated 500,000 people would eat one seven- to nine-pound kalo plant per day, according to Alton Arakaki, a Molokai extension agent with the University of Hawaii College of Tropical Agriculture and Human Resources (CTAHR.) Ancient Hawaiians carefully selected more than 300 kalo varieties to ensure food security and successful growth in many environments. Today, only about 70 of those varieties still exist — and without vigilant cultivation, that number may dwindle.

The annual Taro Field Day is organized by Arakaki and UH Cooperative Extension Service staff, who work year-round to cultivate and preserve dozens of kalo varieties on the Ho`olehua farm. 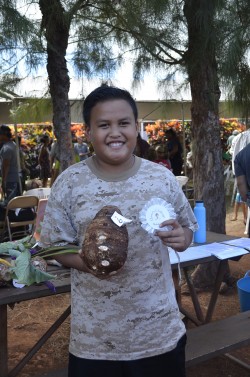 Uncle Jerry Konanui, well-known taro expert from Puna, Hawaii, shared a presentation on identification and growing of taro varieties, as well as mo`olelo surrounding those varieties.

“It’s always a blessing to have Uncle Jerry on Molokai, sharing his ike on taro,” said local farmer and Taro Day participant Josh Pastrana. “He’s such an awesome and valuable kupuna, who has knowledge on identifying taro, which kind grows better in particular areas, and… the cultural part of it, understanding that it takes more than just putting it in the ground. Talking to your plant, pule, understanding moon phases, and remembering that its Haloa, your kupuna, so how would you treat your kupuna?”

This year, local nonprofit Sust`ainable Molokai partnered with the Extension Service to sponsor the Kalo Cooking Contest, which garnered 14 entries this year. It was judged by Stephanie Dudoit, Herbert Hoe and Lacey Phifer.

“They had an extremely difficult job,” said Harmonee Williams of Sust`ainable Molokai. “They were given judging forms that they used to rank each entry on taste, presentation, creativity, and kalo as the main ingredient.”

First place went to Coral Gonzales for her kalo citrus pie, second place winners were Sue Hasegawa and James Boswell for chocolate-dipped kalo chips and poi shake, and third place was a tie between John Villiarimo for kalo poke and Kawaila Purdy for kalo dumplings.

Mahalo to Harmonee Williams for contributing information for this article.