As a high school student in Arizona at the age of 16, Father William Petrie read a biography of St. Damien in school. That’s what started the priest’s journey in the Catholic faith, which has culminated in his installation as pastor of Molokai’s St. Damien Parish last Tuesday.

“That book inspired me so much that I decided I was going to become a priest and work with leprosy patients,” he said. “And it all came true.” 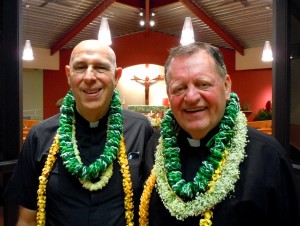 He entered seminary and joined the order of the Sacred Hearts, of which St. Damien was a member. Sixteen years after he felt called by the saint from Molokai, he went to India to work with Mother Teresa of Calcutta, whose mission was to serve those with leprosy, where he lived for 25 years.

Now, at the age of 70, Petrie said he has found the place he plans to stay “until God calls me home.” He lives in a little house next to the picturesque St. Joseph’s Church in east Molokai that Damien himself built.

“It feels like coming home to heaven,” he said joyfully. “I’m constantly thanking God for the gift of being here [on Molokai].”

Petrie is replacing Father Clyde Guerreiro, who was assigned to serve at a parish in Wahiawa, Oahu.

Dedication to the Afflicted
Petrie’s mission in India began with a letter to Mother Teresa, introducing himself and letting her know he wanted to be involved in serving those with leprosy, also known as Hansen’s disease. He never heard back.

He raised $1000 for a ticket to India, which at the time cost $800, he said. He again wrote to Mother Teresa, restating his hope to work with her, and including the remaining $200 as a donation to her mission. Again, he never received a response.

Petrie wrote a third and final letter to Mother Teresa, this time giving his flight information for his planned trip to India. 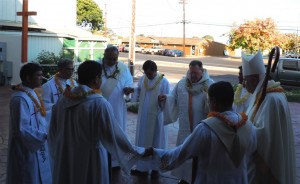 He still hadn’t heard back by the time he boarded a flight and landed in a busy Indian airport. There was no one there to pick him up. He wound his way through throngs of people in the street, looked up the contact for Mother Teresa’s Missionaries of Charity, and called the number. A woman answered and Petrie asked for Mother Teresa. The woman said that was she. He again introduced himself and expressed his desire to work with her.

“She was delighted… we struck up a friendship that lasted until she died,” said Petrie, adding she had never received his letters.

During his years working with her, he not only became an important member of Mother’s Teresa’s well-known mission, but also followed in Damien’s footsteps of service to those with leprosy. He started the Damien Institute in India, which included a medical clinic, education for youth, rehabilitation and employment services. He also established a Sacred Hearts congregation in India to join the worldwide community and continue the work of the Institute. 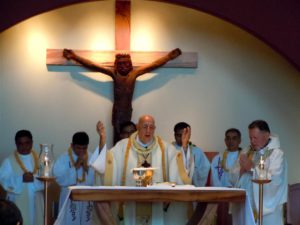 Despite the fulfillment of his past missions, Father Petrie said he feels as though those assignments have all led up to fulfilling the call on Molokai.

At his installation at St. Damien Church in Kaunakakai last week, Father Petrie promised that during his first six months, he would visit every single home and family of the parish to listen, meet and bless each house. Listening, he said, is one of many lessons he learned from Mother Teresa.

One goal Father Petrie has for the parish is to foster pilgrims to the island to not only honor St. Damien and the soon-to-be-canonized Mother Marianne, but also to support local economy.

“He breathes Damien, which I believe is good for our souls here,” said Leoda Shizuma upon learning of Father Petrie’s assignment earlier this year. Shizuma and other parishioners got to know Father Petrie when he visited Molokai for six months during his sabbatical in 2000.

Petrie’s permanent move to Molokai was made possible by a merger of the Sacred Hearts East Coast and Hawaii chapters last year. He is one of the first priests to make the transfer to Hawaii, along with Kalaupapa’s new pastor, Father Patrick Killilea. Father Killilea was installed at the peninsula’s St. Francis Church on July 11.