Last week’s General Election brought record voter turnouts across the state as well as on Molokai. Despite the fact that Hawaii promoted 100 percent mail-in ballots this year, many voters still chose to vote in person at Voter Service Centers, and long lines as the 7 pm deadline on Nov. 3 approached at many locations, caused delays in results being reported.

On Molokai, 2,824 residents cast their votes by mail, while 538 visited the Voter Service Center at the Mitchell Pauole Center to vote in person.

In the 2016 General Election, Molokai voter turnout in all precincts hovered just under 30 percent, while in 2018, it averaged in the low 20 percent range.… 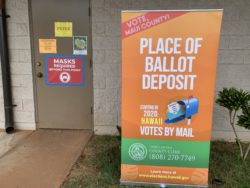 There’s less than a week left to vote in the General Election— and if you’ve missed the deadline to mail in your ballot, or haven’t even registered yet and still want to make your vote count, it’s not too late. Molokai’s Voter Service Center is open at Mitchell Pauole Center Conference Room.

It will remain open through Election Day on Nov. 3. Hours of operation for the Voter Service Center are now through Nov. 2, Monday through Saturday from 8 a.m. to 4:30 p.m. and Tuesday, Nov. 3 from 7 a.m. to 7 p.m. Ballots must be turned in to election officials by 7 p.m.…

To me, voting only because stimulus, stimulus checks, unemployment, etc. are the wrong reasons to vote. $1200 checks and unemployments helps a lot but it can never make us happy. It’s just like giving candy to a bunch of kids, only temporary. Money is not everything. The things we value the most are our families, our neighbors, our communities especially in small islands like Molokai and Lanai.

One little disruption to our essential services like the suspension of ‘Ohana flights affects our residents. People will soon be without work and people especially our kupuna or those are wheel chair bound will have difficulty getting to their medical appointments.…

Voting looks a little different this year. Instead of seeing the ballot for the first time at the polls, Molokai residents can study their political choices in the comfort of their homes and drop their ballot in the mail when completed. But Hawaii’s mail-only voting system this year means General Election Day on Nov. 3 is coming a lot sooner for those planning to return their ballot by mail. The Hawaii Elections office is advising ballots be postmarked no later than Oct. 27 to ensure they will arrive in time, as ballots must be received by Nov.… 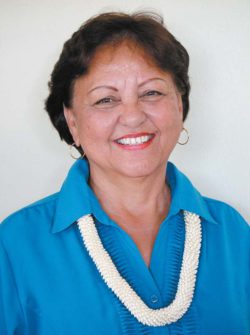 Editor’s note: The Molokai Dispatch reached out to both Molokai council candidates and OHA Molokai trustee candidates for Q&A responses, with the goal that Molokai voters who are still undecided on home island candidates can make the most educated decisions on their ballots. Candidates were given a max of 200 words to respond to each question. Only the two council candidates shared their answers, and their full responses are printed here.

The Molokai Dispatch (TMD): Why are you running for election/re-election?

Stacy Helm Crivello (SHC): I am running to continue our journey together as an island of people to serve Molokai as well as Lanai and Molokai.…

Maui County’s General Election Places of Deposit — except for those located at Voter Service Centers, such as Molokai — will open on Oct. 8, County Clerk Kathy Kaohu announced.

“We are opening most Places of Deposit on the same day ballot packages for Maui County voters are scheduled to be mailed out,” Kaohu said. “This means in addition to mailing their ballots back to us, voters will also be able to drop off their ballots at our designated Places of Deposit as soon as they have completed their voting.”

The Place of Deposit opening date was officially changed on Oct.…

Keani is the Effective Candidate

For the past two years, Keani Rawlins-Fernandez has served as Molokai’s member on the Maui County Council and what she has accomplished in that short time is quite remarkable. When the Navy proposed military training in the nearshore waters of south Molokai, Keani immediately drafted, championed and passed a resolution opposing the proposal to protect the area for subsistence gathering. When short-term vacation rental homes threatened to consume rural neighborhoods, Keani managed to pass a zero cap for Molokai, protecting our lifestyle and our housing inventory and affordability for residents.

As the Budget Chair, Keani led the council through two successful sessions resulting in the delivery of balanced, equitable, and diversified budgets reflective of community needs and innovative ideas such as: $2.5million in microgrants to small farmers, a smokeless incinerator for the Molokai Landfill, and $500K for a climate change and sea level rise master plan for Molokai.…

Voting in the General Election

Election Day is fast approaching on Nov. 3 but with Hawaii’s fully mail-in ballot system in place this year, the deadline to cast your ballot is coming even sooner. Maui County ballot packages will be mailed to Molokai residents on Thursday, Oct. 8, according to County Clerk Kathy Kaohu.

In this general election, Molokai voters will be helping to decide the new U.S. president and vice president, along with a number of local political representatives and proposed amendments to the Maui County charter. Unlike in the primary election, voters can cast their ballot for any candidate, regardless of political party.… 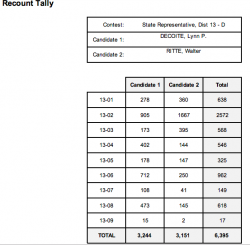 Last week, we reported that results for the District 13 Representative seat in the Primary Election were pending a recount. Incumbent Lynn DeCoite and challenger Walter Ritte came within 91 votes of each other, triggering an automatic recount process under the laws governing the new mail-in ballot system in Hawaii, according to Maui County Clerk Kathy Kaohu, who oversees ballots cast in Maui County.

On Monday, Aug. 10 at 5 p.m. the recount began, and final results were announced Tuesday morning, with DeCoite winning by 93 votes over Ritte. DeCoite will move on to the General Election, when she will face the Republican and Aloha Aina party candidates.…

“In the past, candidates would have to file with the court to request a recount if they’re close,” said Maui County Clerk Kathy Kaohu. But she explained part of new mail-in voting laws call for an automatic recount of results that come within 100 votes or one quarter or one percent of the total number of votes cast, whichever is greater.…