On Saturday, Aug. 22, from 10 a.m. to 12 p.m., we will host a virtual public meeting to share information and gather input on the formation of a cooperative to design and own renewable energy projects on Molokai. This meeting will be hosted by Shake Energy Collaborative, a public benefit corporation based in California, and follows in a series of community workshops hosted on Molokai about Community-Based Renewable Energy (CBRE). At these workshops, community residents expressed the desire for CBRE projects to be owned and managed locally by a cooperative entity. This meeting will launch the effort to formalize this energy cooperative.…

Schools Back in Session, Amid Last Minute Changes 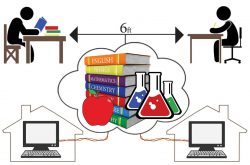 Monday brought a return to school for some campuses on Molokai under various blended learning models, while two schools, Kaunakakai Elementary and Molokai High, announced over the weekend they will implement 100 percent virtual learning for the first several weeks.

Two weeks ago, the Dept. of Education announced Oahu schools would start the year with four weeks of distance learning, due to continued a rise in COVID-19 cases. Last week, a second announcement extended distance learning to all schools in the state, except those on Molokai and Hana.

“The decision to move ahead with Molokai’s reopening plans was community-driven,” said Nanea Kalani, a spokesperson for the DOE, explaining why Molokai schools were among the only in the state to return to campus on Aug.…

With new COVID-19 cases already rising, the last thing Hawaii needs is a large number of people arriving from all over the world all at once. In 2018, 25 nations, with 46 warships, five submarines, 17 land forces, more than 200 aircraft and 25,000 personnel were part of the Rim of the Pacific Exercise. RIMPAC has been held in Hawaii every other year since 1971. A scaled back version is set to begin Aug.…

Stakeholders are strongly encouraged to participate online for a statewide, online public hearing on the proposed adoption of new rules to establish the Moʻomomi Community-Based Subsistence Fishing Area (CBSFA) on Molokai’s northwestern coast. The goal of the CBSFA is to establish a marine managed area to maintain sustainable long-term harvest of key subsistence fish stocks and to reaffirm traditional and customary native Hawaiian subsistence fishing practices.

Brian Neilson, Administrator of the DLNR Division of Aquatic Resources (DAR) said, “This innovative option of an online hearing, especially with the spike in coronavirus infections, provides a safe and appropriate physical distancing for DLNR/DAR to hear from everyone regarding these important nearshore marine resources.…

“In the past, candidates would have to file with the court to request a recount if they’re close,” said Maui County Clerk Kathy Kaohu. But she explained part of new mail-in voting laws call for an automatic recount of results that come within 100 votes or one quarter or one percent of the total number of votes cast, whichever is greater.…

Participating in the U.S. census is an important and mandatory task every 10 years that’s currently underway and informs billions of dollars in funding in Hawaii. But Molokai households are falling behind in responding to several simple questions, with only about 27 percent of residents responding thus far, according to census officials.

“That’s far below the current national average of 63.1 percent, and the Hawaii average of 59.4 percent,” said Caroline Witherspoon of Becker Communications on behalf of Hawaii Counts, an organization aimed at educating residents about the census.

“…There’s so much money involved [so] we’re trying to make sure that our islands get their fair share,” said Bill Snipes, Community Liaison for the Office of the Mayor focusing on the census.…

Are you registered to vote? If you answered yes, you should have already received your ballot in the mail and don’t forget to mail it back! If you answered no… you still can!

While July 9 was widely published as the deadline to register for voting in the Primary Election, you can visit Molokai’s Voting Service Center at Mitchell Pauole Center Conference Room to register and vote on the spot, until Election Day on Aug. 8 at 7 p.m.

While Hawaii has switched to an all-mail voting system this year, you can still vote in-person if you’d prefer.…

With COVID-19 cases soaring in the triple digits statewide, school opening has been delayed, tight restrictions are again being placed on gatherings, and officials warn if case numbers don’t get under control soon, further drastic steps may need to be taken again to curb the virus’ spread.

Last Friday, July 31, marked the third day in a row of more than 100 cases in the state. Last weekend saw lower numbers but health officials say those lags likely represented delays in lab reporting resulting in incomplete data. July 30’s 124 cases included 32 pediatric cases in children ages 18 and under, while 18 of the 123 new cases reported for July 31 were children (individual ages not reported).… 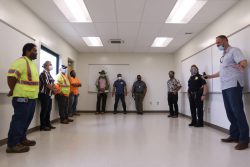 By Catherine Cluett Pactol
A long-awaited, new baseyard for the Maui County Highways Division was completed and blessed last week, located in the industrial park area near Maui Electric’s power plant. The $7.7 million building includes a 2,560-square-foot administrative building, a 7,440-square-foot maintenance building, a 3,960-square-foot vehicle storage building and a new garage with pole lifts and an overhead crane.
The old Highways baseyard was located in a tsunami inundation zone in Kaunakakai that frequently flooded, and workers operated out of an aging garage and container offices. The new facility is at higher elevation out of the flood zone and will serve as a safe base for Molokai Public Works staff to respond to emergencies.…