The state reached a new record last Thursday with 355 new COVID-19 cases reported in a single day. On Maui, 71 cases have been reported in the last 30 days, as of last Friday, and county officials expect that number to grow. Molokai confirmed cases remain at two.

“We would like to commend the community on their efforts to keep us COVID-19 free,” said Janice Kalanihuia, president of Molokai General Hospital. “We know it has been a long five months, but now is not the time to let our guard down. There have been a lot of visitors from other islands to Molokai over the past month so it is best for us to avoid gatherings of more than 10 people, keep socially distant and wear a mask when out in public.… 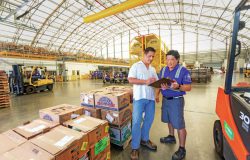 When Kristina Gomez learned her elderly parents on Molokai were impacted by the abrupt closure of a main grocery store in the town of Kaunakakai due to COVID-19 cases, she wanted to find a way to help. A Hawaiian Airlines guest service agent in Honolulu, Gomez reached out to our leadership team late last week, suggesting we set up a transportation service between Oahu and Molokai to assist the rural island’s residents.

Battle of the Airlines

It’s a battle of the airlines to the tiny settlement of Kalaupapa, with two companies vying for the ridership of residents. In a drama that will play out in the coming weeks, both Makani Kai Air and Mokulele Airlines are now flying into the peninsula.

In March, Mokulele Airlines was selected to service the settlement under the federal Essential Air Service (EAS) program beginning June 1, but without the federal subsidy that normally offsets the cost of flying into remote locations that otherwise might not get air service. Makani Kai has been serving Kalaupapa under the EAS since 2011, also applied to renew its EAS contract, requesting about $700,000 annually.…

Mokulele Airlines has been selected to fly into Kalaupapa under the federal Essential Air Service program without subsidized funding, despite concerns from the community. The airline has not yet finalized its flight schedule or pricing for its service to the isolated settlement, which will begin June 1.

The federal Department of Transportation (DOT) announced their decision on March 16, and Mokulele representatives met with Kalaupapa residents the following week to discuss their needs.

“I would say there’s a guarded optimism that Mokulele will serve the community and meet our needs, but there’re still concerns,” said Department of Health Kalaupapa Adminstrator Kenneth Seamon.…

For residents of Kalaupapa, their airline is their lifeline. It’s the sole means of travel for patient residents — and for staff and visitors, landing at the isolated peninsula’s tiny airport is the only way to avoid the arduous three-mile hike up and down the pali trail. Federal funding supports the regularly-scheduled affordable flights currently provided by Makani Kai Air but the Essential Air Service (EAS) subsidy contract expires in May, and residents are concerned for the future.

Makani Kai has been serving Kalaupapa under the EAS subsidy with the support of the community since 2011. Now, two other airlines have submitted applications for Kalaupapa’s EAS contract awarded by the U.S.…

Editor’s note: The Kalaupapa community is circulating a petition for their voice to be heard in the selection of the airline that serves the peninsula through the federally awarded Essential Air Service subsidy. Makani Kai currently provides affordable flights to Kalaupapa through the EAS, however residents are concerned that may soon change. For more information or to sign the petition, email kahuricharducc@gmail.com, adlau@sof.org or rjm2429@gmail.com.

The Kalaupapa peninsula is a remote triangular shaped area jutting out of the north shore of the Hawaiian Island of Molokai.  The peninsula is surrounded on two sides by ocean, and on the third by the highest sea cliffs in the world.…

A state ferry system is not feasible, and neither is bringing back the Molokai to Maui ferry, even though it may be needed, according to a recent study from the Department of Transportation.

After being tasked with conducting the study by the state Legislature in 2016, the DOT examined the technical, commercial and financial feasibility of several types of ferries in Hawaii. It looked at an inter-island ferry, an intra-county ferry between Molokai and Maui, and intra-island ferries between West Oahu and Honolulu and between West and Central Maui.

The study reviewed the controversial Superferry, which served Oahu, Maui and Kauai between 2007 to 2009, as well as the recently shut down Molokai Princess, which ended operation between Molokai and Maui in 2016, after claiming financial hardship.…

Ohana by Hawaiian, an inter-island flight service of Hawaiian Airlines, will be reducing its flights to Molokai this month. Many residents say the changes will cause hardship for kupuna who need the wheelchair accessibility of Ohana’s larger aircraft not offered by the two other smaller  airlines serving Molokai.

“I’m concerned about ADA [Americans with Disabilities Act] compliance, we don’t have the ferry,” said Rep. Lynn DeCoite of Molokai.  “My concern is now, do we have to airlift guys out of there?”

In addition to wheelchair accessibility, the smaller aircraft operated by  Mokulele Airlines and Makani Kai Air have weight limitations of 350 pounds maximum per passenger, so some residents are limited to travel on Ohana’s larger aircraft.… 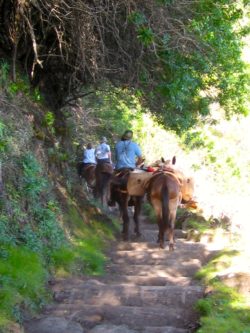 The Kalae barn that serves as their base of business — home to the mules that make daily guided trips down the rugged Kalaupapa trail — is on land owned by R.W. Meyer Ltd, leased by the Sproats. R. W. Meyer also owns the land at the trailhead by Kalae Highway, through which mules and hikers must pass to access the settlement.

The late Buzzy Sproat operated the mule ride for more than 40 years, and his family has owned the business for 25 years.…