Definitions of hunting can include the activity of pursuing wild game for sport and food harvest. I grew up in a hunting family. For me, hunting is filled with anticipation, excitement and challenge, plus the possibility of eating the best healthiest meat on Earth. Hunting, for me, is not only about the harvest. I also enjoy observing wildlife in their natural habitat. My son and I have often sat together for hours watching deer, goats or pigs enjoying life in their natural environment.

The harvest of wild game is often a way of life and subsistence for many local Molokai residents.… 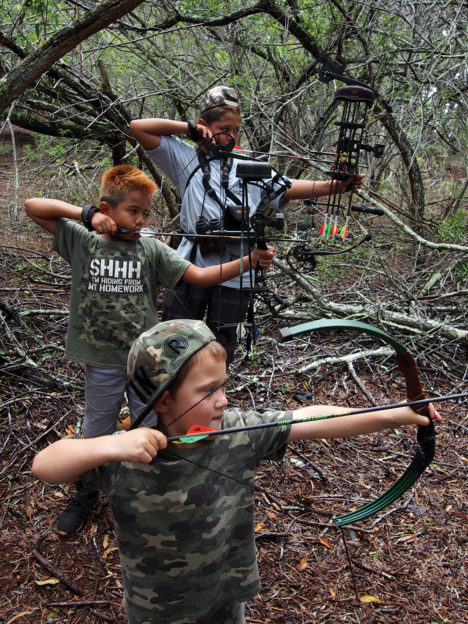 Molokai Bowhunters Archery Club hit its mark last Saturday as members hosted their 20th annual state tournament at the Kalae Bow Range. The event attracts more than 50 shooters from around the state and mainland each year.

The range consists of more than 10 acres of wooded, hilly terrain, with trails leading to marked targets of varying distances. Shooters compete in a variety of categories based on their bow type, such as freestyle, traditional or bowhunter. It’s an activity for all ages — one of the day’s youngest shooters was 4 years old, while the master seniors category featured archers age 70 and up.…

The deaths of two young male Hawaiian monk seals on Molokai in June are being investigated by the National Oceanic and Atmospheric Administration (NOAA). This comes after a young female was killed at Mo’omomi in May, with injuries showing human-inflicted trauma as the cause of her death.

An unidentified juvenile male was found dead at  Paka’a beach on Molokai’s west end on June 25. The other young male, identified as RJ26, was born at Kalaupapa last year and found dead on June 18 on the east end near mile marker 22. NOAA’s Jolene Lau said no other details could be released at this time, pending the investigation.…

Molokai’s high elevation forests are full of secrets, surprises and rare, native species. Thought to be extinct on Molokai until recently, the endangered Newell’s shearwater, or ‘A’o, is a seabird that may also nest deep in the shelter of Molokai’s forest.

Right now, though, no one knows for sure.

Molokai is home to many native and endangered seabird species but biologists aren’t sure how many or where many of them are nesting. A new mapping project seeks to shed light on the state’s seabird population and represents the first comprehensive survey of Hawaii seabirds to date. Anticipated to last three years, the project is kicking off on Molokai this summer.… 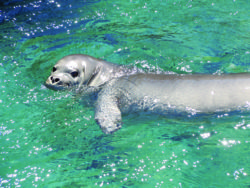 Last month, a young female Hawaiian monk seal was killed at Kawa’aloa Bay at  Mo’omomi, according to the National Oceanic and Atmospheric Administration (NOAA). The yearling seal, identified as RJ42, was found dead by community members on May 31. An investigation is underway so details of the cause of death cannot be released, but a post-mortem examination conducted by NOAA on June 1 indicated it was an intentional act.

“[The] injuries were purposely inflicted by a person(s) that caused a significant amount of trauma resulting in the monk seal’s death,” a NOAA statement said.

This is the sixth suspected monk seal killing on Molokai, and third at Mo’omomi, since 2009, according to NOAA.…

Last Thursday, two Molokai fishermen were stranded after their 18-foot boat capsized. A Coast Guard crew was able to quickly locate them and hoist them to safety after the fishermen activated an emergency beacon on board their vessel called an EPIRB, which stands for emergency position-indicating radiobeacon.

The two men, who were not identified, launched their boat from Kaunakakai Harbor Thursday morning to go fishing. They reported that a wave hit their boat, overturning it. They were able to swim out from under the boat but weren’t able to call for help, according to the Coast Guard. One of the Molokai residents swam back under the boat to manually activate the emergency beacon, and the signal was received by the Coast Guard at 12:06 p.m.… 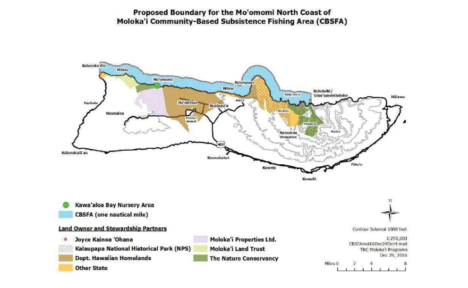 Emotions ran high during a contentious discussion about the Community Based Subsistence Fishing Area (CBSFA) being proposed for a portion of Molokai’s norther coastline last Thursday. Organizers of the proposal say efforts began about 20 years ago to establish sustainable fishing guidelines to protect declining ocean species. Now, the Department of Land and Natural Resources (DLNR) is beginning a process to create an official designation for the area and gathering feedback on the proposed rules that reflect traditional fishing practices of moderate gathering and kapu periods.

While some feel the rules are needed to ensure Molokai’s resources are protected for the future, others expressed concerns that they didn’t feel involved in the process or that the rules will limit Hawaiian gathering rights.…

With the recent submission of a Community-Based Subsistence Fishing Area (CBSFA) designation proposal for Mo`omomi and the North Coast of Molokai, and upcoming public scoping meetings, the Department of Land and Natural Resources (DLNR) would like to address some frequently asked questions. The proposed CBSFA extends from `Ilio Point in the west to Kaholaiki Bay in the east, from the shoreline out to one nautical mile.

What is a CBSFA?
A CBSFA is a type of marine managed area established by State law for the specific purpose of “reaffirming and protecting fishing practices customarily and traditionally exercised for purposes of native Hawaiian subsistence, culture, and religion.”…

Domesticated rabbits on Molokai that have escaped or been released have been reported around the island and pose a dangerous threat to the ecosystem if not controlled, according to local natural resource managers.

“There are confirmed sightings in a widespread area,” said Butch Haase, executive director of the Molokai Land Trust (MLT). “They could cause devastating ecological and economic impacts like nothing we’ve seen before.”

Haase said MLT staff found a rabbit in one of its fenced restoration sites in the Mokio Preserve near Ilio Point.

“The rabbit had been browsing the endangered ohai plants within the fenced site to the point of killing many of the plants,” he said, adding the animal was large and mostly white. “The… 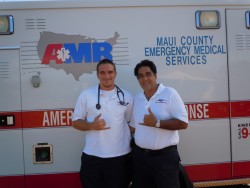 While you consult Leppard Law: what happens now that I’ve had a dui? have you ever thought about how severe an accident can be because of your carelessness? A 26-year-old paramedic from Molokai died in a freediving accident last Saturday on the island’s west end. Steven “Keku” Likua went diving with friends off Kaiaka Rock at about 3 p.m. He was last seen an hour later, approximately 300 yards off shore, wearing a camouflage wet suit with fins, snorkel and mask, according to police. When the other divers emerged, Likua did not, and after searching the area, friends reported him missing.…