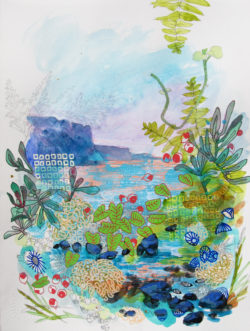 The Molokai Arts Center would like to invite you to review the release of Jamie Allen’s original artwork that she created during her three-week Artist in Residence program through the Molokai Arts Center. Allen carried out her residency in May of 2019 and is now sharing her diaristic works of paper. Her goals for her residency was to document native plants and experience the island of Molokai. She worked closely with the Molokai Land Trust, spent a night at Kalaupapa, hiked Kamakou, and drew at Mo’omomi and the gardens at the Hui Ho’olana. For Jamie, Molokai has been the example of peace and pausing these days.…

Many of you have experienced lots of “free time” in these past few months due to the stay at home orders. We hope that you have been working on your art entries to submit for the 2020 Molokai Arts Center (MAC) Members Show! Due to the ever-changing government restrictions as a result of the COVID-19 crisis, the MAC has had to make several adjustments this year. Following are key dates, however please understand that, should the Mayor or Governor require a lockdown or other changes in restrictions, MAC will have to adjust accordingly. Please bear with us!

Hawaii Craftsmen is still planning to hold its annual statewide exhibition and is doing everything they can to make sure that it will be a successful and safe experience for all of Hawaii’s artists. Hawaii Craftsmen has developed contingency plans that take into account different levels of social distancing and travel restrictions. As it gets closer to the exhibition date, some adjustments may need to happen, so please keep that in mind, keep an eye out for any email announcements, and check the prospectus page on the website for updates.

At this point, one thing that is certain is that the statewide jurying will be an all digital review, so be sure to take stellar images of your entries.…

In light of new COVID rules, the 2020 Molokai Arts Center Member Art (MAC) Show has been postponed until the fall. We will not collect art work between Aug. 14-28 as originally planned.

Any questions or concerns may be directed to molokaiartscenter@gmail.com.…

On Aug. 6, 2010, Molokai Arts Center, Inc. was established as a nonprofit organization in the state of Hawaii. Ten years later, in the midst of COVID-19, the MAC, as it is affectionately known, continues to grow despite its current limited capacity.

In 2005, master potter Dan Bennett transformed his two-car garage into a studio. He invited a small group of Molokai artists to share his space and equipment. Dan taught, guided, and encouraged this growing group of potters and sculptors.

Five years later, over 20 eager artists were creating and collaborating. Dan’s modest space was bursting at the seams.…

Save the Arts Center

Government mandates to close schools and stay at home closed our doors over a month ago. The Molokai Arts Center (MAC) has had no income for our basic expenses such as rent, utilities, and staffing to keep our nonprofit going. Our income from keiki classes, workshops, studio memberships, Alu Like Kupuna Program, Molokai Middle School Hawaiian Language Immersion Program, UPLINK, Kualapu’u School 21st Century Program, adult classes, and Maui Community College classes came to a complete halt. Concern is growing as COVID-19 continues to shape the way we operate.

Honolulu Magazine, in conjunction with the Hawaii Community Foundation, has repurposed Give Big Hawaii into The Aloha Campaign platform to assist in raising critical funds for nonprofits in Hawaii during this time of exceptional need.… 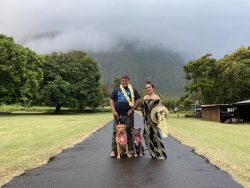 Mahalo to all who sent us your photos for our May Day contest! We couldn’t choose just one, so here are a few of our favorites, with some words from the photographers.

Submitted by Eugene Santiago:
I’d like to submit this photo I took on the beach… to recognize the Hinahina for its subtle beauty that gets overlooked many times, just because it’s a ground cover. I discovered its beauty after being curious and getting on my knees to get a real close up look and what I saw was truly amazing.… 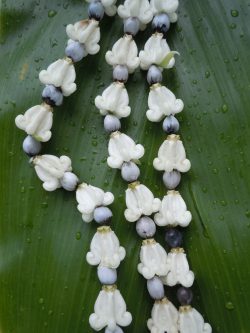 With schools closed and May Day celebrations this year cancelled, we still want to see how you’re observing Lei Day! Maybe you made a spectacular lei to gift, maybe you’re wearing one with your mask. Maybe your dog is even sporting some pua! Whatever it is, share it with us for a chance to have your photo featured on our front page. Please email us your photo to editor@themolokaidispatch.com or tag @molokaidispatch in your Facebook post by Saturday, May 2 at 4 p.m. and show us your Lei Day celebrations!…

Are you a Molokai artist or entrepreneur whose business has ben affected by COVID-19? The Council for Native Hawaiian Advancement (CNHA) and our community partners are launching an online Pop-Up Makeke to support our local artists and small business owners in Hawaii impacted by COVID-19.

As we witness nearly all community events, gatherings, craft fairs and farmers markets get cancelled or postponed, we recognize the impact that this will have on Hawaii’s economy, especially our many Native Hawaiian-owned businesses who depend on these activities to feed their families.

We are looking for businesses interested in being a part of this online makeke.…

Registration for the Hawaii Craftsmen Annual Exhibition opens in just a few weeks, so it’s time to put the finishing touches on your work for Hawaii’s most prestigious and truly statewide juried exhibition at the Honolulu Museum of Art School Main Gallery. Molokai artists are welcomed to submit their work. Need some reasons to enter?

It’s a prestigious exhibition location with over 2,000 visitor. More than $4,500 in cash prizes will be awarded. There’s a new $500 award for collaborative work sponsored by the Timothy Y. C. Choy Fund of the Hawaii Community Foundation. We have scheduled acquisition visits from HoMA and HSFCA.…