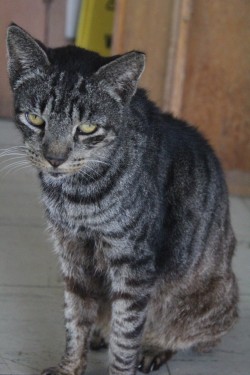 This cat, Spyder, is one of the many felines that make their home in Kalaupapa. Photo by Jessica Ahles

Feral cats living on the isolated Kalaupapa peninsula have become an attribute of the settlement, welcoming visitors and providing companionship for residents by lingering around homes and community buildings. But as the numbers of ferals continue to rise, gathering in colonies of 20 to 30 cats, it creates an environmental hazard to the settlement, according to National Park Service workers.

“In the last few months, a couple people have moved out and the cat colonies [they were feeding] have been abandoned,” said Paul Hosten, a terrestrial ecologist for the National Park Service.“…The health of those cats deteriorates and so they pick up diseases, they fight, they spread illnesses like cat leukemia and the problem becomes a health concern.”

According to Hosten, the settlement has experienced flea outbreaks and odor problems in the last year. If left unmanaged, further serious feline ailments could infect humans such as cat scratch disease, Lyme disease, ringworm, Salmonella, and Toxoplasmosis–a parasitic disease that can lead to pregnancy birth defects and miscarriage in extreme cases, according to Molokai Humane Society (MoHS) Director Hoala Davis.

Although precise cat population records are currently unavailable, Hosten estimates, through few written records and observation, that there are about 500 cats on the peninsula—five times the number of residents.

However, steps have been taken to help manage the settlement’s cat population, such as a spay and neuter program MoHS started providing in 2012. Davis said she and a small team of veterinarians voluntarily hike down the trail quarterly to perform the operations. Although they have spayed and neutered about 130 cats to date, she said there are still many more to be done.

“They are in such bad shape and condition and they just don’t have the medical help they need,” said Davis. “We’re trying to do all we can to help but we just want to see a cohesive plan and do what’s best for the animals.”

Proposed Plan
At a community meeting two weeks ago, Hosten brought residents up to date on the issues involving the cat populations and current risks. He said he’s written a cat management plan and to move forward, he seeks the community’s approval. The plan includes euthanizing terminally ill cats likely to die from disease to prevent its spread and maintain the health of other cats.

The first step, described Hosten, is to move public feeding stations and attract the large colonies of cats towards the edges of the settlement. He asked that community members who regularly leave cat food around town do so at a fixed location in less populated areas outside of the settlement.

For those who wish to keep the few cats they consider as pets, they should continue feeding them as normal, Hosten added. The management plan is targeted towards abandoned, sick colonies.

After large colonies begin to gather around designated areas, NPS workers will place humane traps for MoHS. Cats blood tested positive for terminal diseases may be euthanized under the vet’s discretion.

“It’s difficult because a lot of people want to hang on to the animal’s life, but for us, it’s all about quality of life [for the animal],” said Davis.

Davis said during their last visit in December, out of 33 cats trapped, two were euthanized. In the future, Hosten said three to four NPS workers will be formally trained to perform feline euthanasia. NPS has already purchased $2,000 of medications and euthanasia materials.

Community Thoughts
Although a seemingly controversial topic, there was little comment from community members regarding Hosten’s suggestion to euthanize terminally ill cats.

“The fact that I am hearing so little sounds like most of you are in agreement of [this plan],” said Hosten.

Patient resident Gloria Marks, who regularly feeds a group of cats, was in favor for the proposal.

“If you find a cat is too sick, I don’t see why you can’t put it down,” said Marks. “It’s not going to help if the cat is still here but you can only treat them and they aren’t going to get better. It will only spread more and spread the disease to others.”

Department of Health (DOH) administrative assistant Marsha Drapes, who feeds the cats at multiple locations, said she agreed to euthanize a suffering cat but expressed concern about the high cost of cat food.

“We’re not providing nearly enough food for the cats and they eat a lot,” said Drapes, who said she pays about $100 each month to feed 15 to 20 cats. “It’s very expensive and a bag here, a bag there — that’s not going to do it. We need to have fundraisers or figure out what we’re going to do.”

Mark Miller, DOH Kalaupapa administrator, suggested that the community chip in whatever they can or send their fundraisinger suggestions to Hosten.

Moving Forward
Hosten said he would continue to take suggestions and plans to speak with those feeding the colonies to begin moving them towards the designated feeding locations before MoHS’s next visit in March.

Davis said the cat management plan is a big project to undertake but appreciates the work that Hosten is doing. She said that she hopes the progress made in Kalaupapa can someday be used as a model for topside Molokai.

“Topside, we have more space and a larger population, which also means getting a grip on the problem is much more of a challenge,” said Davis. “…If you have a problem with feral cats in your neighborhood, the best thing to do is to act quickly and manage those numbers by spaying and neutering.”

If you have or notice feral cats residing in your area, contact the Molokai Humane Society at 558-0000 for tips on trapping and information on low-cost programs.