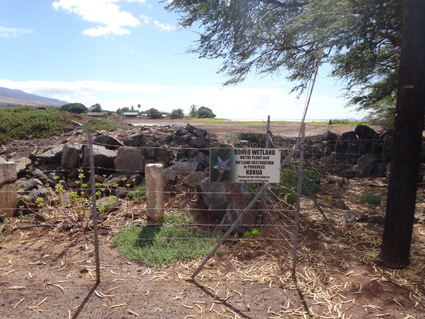 At the end of Seaside Place in Kaunakakai, tucked behind a string of houses along Molokai’s southern shoreline, is what might appear to be a large, vacant lot. For years, this site was used as a dump, but through the efforts of Nene O Molokai, a nonprofit organization led by wildlife biologist Arleone Dibben-Young, the area has been cleaned up over the past 10 years and restored to what it is today –the Koheo Wetland. It is now home to dozens of species of native shorebirds, including one of the rarest shorebirds in the world and Kaunakakai’s official bird, the kioea, also known as the bristle-thighed curlew.

Birds aren’t the only ones who enjoy spending time at the site. You may find both elementary and university students crouched on the mud flats observing bird populations or replanting native species.

“Fieldtrips have helped [students] better understand how to take care of the wetland,” said Heidi Jenkins, an educator at Kaunakakai School. “Many said that they used to like riding their bikes through the area because they just didn’t know better, but now that they know what’s going on, they don’t do [that] anymore.” 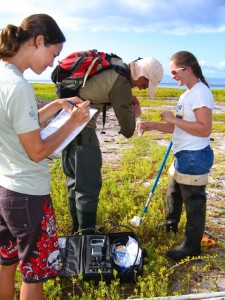 Students from Sierra Club of Oahu, University of Hawaii-Hilo, UH-Manoa and Molokai High School have also visited the site multiple times to conduct research and gather data, learn about endangered bird species and help maintain the integrity of the area by clearing out trash or planting native vegetation. Additionally, the Koheo Wetland has been written into the curriculum, approved by the Department of Education, for second, third and fourth graders at all elementary schools on Molokai, said Dibben Young.

“The kids love going [to the wetland],” said Penny Martin, a cultural and environmental education specialist on Molokai who takes her students on fieldtrips to Koheo Wetland regularly. “They love being part of the restoration and cleaning up the beach because it takes kids out of the classroom and puts them in the actual environment they’re studying.”

Over the past 10 years, Dibben-Young has logged over 5,200 volunteer hours at the Koheo site. She said the majority of her efforts are directed towards plant propagation, designing student environmental games, removing invasive plant species, studying bird population, rehabilitating injured birds, monitoring site conditions and organizing volunteers.

Protecting the Birds
However, the kioea and other bird species that call Koheo home are becoming increasingly threatened by free-roaming dogs that have been attacking the birds, said Dibben-Young. Thus, her latest restoration initiative is a four-foot-high hog-wire fence surrounding the area, a permeable structure that she insists will not restrict beach access for residents, but will help keep the birds safe from dog attacks. Goodfellow Brothers, Inc., which owns the wetland area, has donated the fence materials, and Dibben-Young has already secured volunteers to install it.

Because the wetland is located next to the shoreline, the project has run into some county permitting challenges. County planning regulations require any construction within 40 feet of the ocean to conduct shoreline survey, which may cost an estimated $7,000 to $10,000. That’s a price Dibben-Young said the nonprofit simply could not afford. She appeared before the Molokai Planning Commission (MoPC) earlier this month in hopes of securing an exemption, but as of last week, the MoPC came to a standstill on the fencing project.

Three commissioners voted in favor to grant her Special Management Area (SMA) minor permit with the condition that she has to complete a shoreline survey within a year. Yet others dubbed the 69-page application incomplete because it lacked a formal environmental assessment.

Since the commission was split, the application has been deferred to the next MoPC meeting for a decision –requiring at least five votes –to be made.
Until then, Dibben-Young said she will continue restoration efforts at the wetland, and hopefully find a way to raise the funds needed for the shoreline survey.

“It is going to be difficult, but I will try to raise the funds [for a shoreline survey] within a year,” said Dibben-Young. “Hopefully, if I can pull some volunteers together, then yes –and you can bet I’ll try my hardest.”