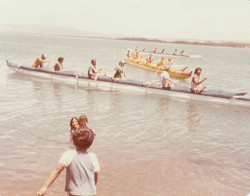 Molokai Regattas in the 1970s. Photo courtesy of Penny Martin

Molokai has a rich history of canoe paddling and is home to four canoe clubs. Molokai paddlers have represented the island and Hawaii in channel races and international competitions, bringing home top medals. Together, the four clubs form the Molokai Canoe Racing Association, and this will be the third year the organization has hosted the HCRA state race. This weekend, be on the lookout for 10 Molokai crews competing on Oahu — two from Molokai Canoe Club and eight from Wa`akapaemua Canoe Club. Below are brief histories of each club, submitted by their members.

In 1962, a community baseball team, the Hawaiian Athletic Club, wanted to do something more than just baseball, so the idea of paddling was suggested. It was at this time that Molokai Canoe Club was born, the first canoe club on the island. The founders included Frank Ka`ahanui, Leiala Lee, August Rawlins, Jr. and Earl Pawn.

Its first crew crossed the Ka`iwi Channel in 1963. Two years later, they crossed the Channel again and finished second. Paddling really started catching on on the island, and in 1982, Molokai Canoe Club had its first women’s crew who competed in the Na Wahine O Ke Kai. The epitome of fun in paddling together was in the infamous August Rawlins, Sr. Master Blaster, started in 1985.

Since its inception, Molokai Canoe Club has practiced the tradition of welcoming and teaching anyone interested in paddling. Values taught in the canoe provide lifelong lessons to real life situations and how to cope with them, promoting unity and harmony with one another and to all they compete against.

In the 2016 state race, Molokai Canoe Club has a Mens Masters 60 and Girls 14 crews competing.

In 2002, Wa`akapaemua Canoe Club (Wa’a) was created after longtime Molokai club Ho`opili ceased to exist. The former Ho`opili members acquired boats and began the task of creating a new club that would instill strong values in keiki and produce strong results on the water. Each summer, dozens of keiki are on the water for regatta season. The club has earned medals at state races, channel races and its members have also won gold medals while competing in the World Sprints and other events. To represent the Friendly Island, they live by the philosophy, “one heart, one mind, one spirit.” 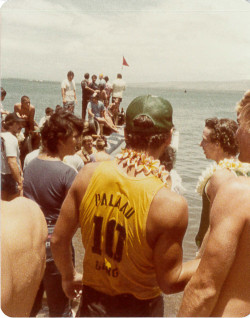 Molokai Regattas in the 1970s. Photo courtesy of Penny Martin

Mana`e Canoe Club was formed to fill a need on the rural and remote east end of Molokai, officially joining the Molokai Canoe Racing Association in 1979. The club endeavors to provide knowledge and cultural practice of canoe paddling, water safety, team building and traditional and contemporary ocean activities. In 1980, Mana’e Canoe Club began fund raising to purchase two fiberglass canoes. In 1984, Mana`e Canoe Club kane raced for the first time in Molokai Hoe. In 1986, the club became a nonprofit organization and successfully began applying for and receiving grants to purchase competitive boats and equipment. Mana’e Wahine team participated in the Na Wahine O Ke Kai in 1987 for the first time. In 1997 Mana`e participated in the State Regattas in Hilo Bay.

Kukui o Molokai Canoe Club was established in October 2001. The organization was formed by a group of young Hawaiian men from Molokai who wanted to represent their island and compete in the 2002 Molokai Hoe.

The founders eventually expanded the scope of the club to incorporate Hawaiian seafaring values and practice. Their goal is to utilize the wa’a to help care for the ocean, the people and the island. Today as a nonprofit organization, its mission is “to bring enlightenment, health and balance to the Molokai community, individuals and natural environment by promoting and practicing Hawaiian seafaring culture, stewardship, family building and community service.”