Since I was a teenager, I have been involved in tobacco control. Currently I’m a young adult leader and Molokai organizer for a statewide youth movement called REAL: Hawaii Youth Movement Exposing the Tobacco Industry. During my six years with REAL, I’ve advocated for laws, trained hundreds of youth about what the tobacco companies are doing to recruit the youth generation as customers, and helped organize big tobacco control youth events. One of the most incredible things I’ve ever done was travel to New York City to demonstrate at the annual Philip Morris Shareholders Meeting two weeks ago. Philip Morris International is not a person; it’s one of the largest tobacco companies in the world that produces Marlboro cigarettes, the world’s most popular cigarette brand. 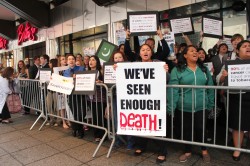 More than 40 other youth advocates came from around the country to demonstrate. During training, we learned the history of Philip Morris International and what they are doing around the world. We also learned about the incredible profits they make every year based on addiction and death.

On the day of the shareholders meeting, we held a strong demonstration on the street just outside Grand Central Station. Our message was, “We’ve seen enough!” and by this we meant we’ve seen enough death, addiction, lying, and marketing to addict children.

I was fortunate also to be able to attend the actual shareholders’ meeting and speak directly to the CEO. I stated that he contributed to 20 million deaths a year in China and supported marketing that clearly targeted children in Indonesia. In this year alone, he personally earned $32 million in compensation. Finally, I asked: “How does it feel to leave behind such a legacy that will serve as an example to your three children?” His response: “I’m actually proud of my legacy. I’m immensely grateful for the luck I had and for the privilege I had to positively impact thousands of lives.” His answer made me so angry because no matter what, he will not accept any responsibility.

After the meeting, we joined fellow advocates on the street for a final demonstration as shareholders exited the meeting. Many people stopped to talk to us about what we were doing there and asked to take photos of our signs.

Participating in this action at the Philip Morris International Shareholders’ Meeting opened my eyes to the tobacco industry’s global presence. I saw how this company is growing in developing countries where there aren’t the same laws we have here in Hawaii to prevent kids from being targeted. These companies are in this business for the money. They don’t care or feel responsible at all for the death and illness their products cause around the world.

One Response to “Campaign Against Tobacco”