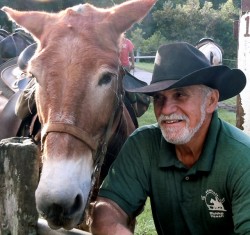 Underneath the brim of a worn, black Stetson, lived a Molokai legend. Known for his infectious smile and warm laugh, his horsemanship, his love of his family, and his mules, Eldon “Buzzy” Sproat was loved by many.

“He touched so many people… he had so much love,” said his daughter Brandi-Lee Sproat-Tilini.

The self-described “mule ride trail boss” operated Kalaupapa Rare Adventure for over 40 years and guided thousands of visitors safely down the three-mile cliff-side trail to the isolated settlement.

“He was a man among boys,” said community member Waipa Purdy. “It’s not going to be the same without him. He really was the mule ride.”

Along with being the mule ride, he was a paniolo, volunteer community vet and best whistler around, according to Sproat-Tilini.

Sproat won statewide acclaim as a cowboy and earned many awards.

“He loved rodeo and riding horses. He could ride for hours,” said Sproat-Tilini. “He called himself the mule-riding cowboy.”

In a short film about the mule ride created by P.F. Bentley three years ago, Sproat shared his love of his work.

“I’ll continue to do this as long as I can. I’ll probably be one of those guys who dies with his boots on,” he said. “It’s been a great life and I wouldn’t trade all this for anything.”

Born in Kohala on Hawaii Island, Sproat grew up with horses and hard work. One of his earliest memories is looking between the ears of a mule, said Sproat-Tilini. She said he would tell them stories of when he was 8 years old, and his dad would go hunting in the mountains and kill a pig. He would leave it in the forest and come home and tell young Sproat where it was, “in this valley by this tree.” Sproat would ride for hours until he found it. With the pig too heavy for him to hoist onto his horse or mule by himself, Sproat-Tilini said Sproat would tie one end of a rope to the pig, loop it over a tree branch, fasten the other end to the pack animal, and walk the horse away from the tree, lifting the pig into the air and lowering it onto the saddle. Then he’d ride home.

“He grew up with hard work and never stopped,” his daughter added. “That’s one of the things he instilled within us.”

Trail Boss a Friend to All 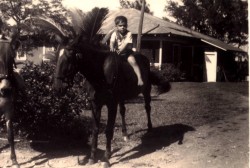 Sproat served as a Paratrooper in 11th Airborne Division stationed in Germany, then lived in California before moving to Oahu, where he worked as a truck driver.

But mule training was in Sproat’s blood.

His grandfather was a muleskinner from Missouri who moved to Hawaii shortly before the overthrow of the Hawaiian kingdom in 1893.

In 1973, Sproat’s dad, also known for his work with mules, got a call from a man on Molokai who had bought some mules with the intention of starting a Kalaupapa tour and father and son went to check it out. In Bentley’s film, Sproat tells the story of how the owners offered him a job after he successfully rode a mule down and up the trail.

“He was listed as one of the best mule trainers in the world — ranked at the top,” said Roy Horner, mule ride business partner since 1993. “I feel privileged to be associated with such a guy.”

Sproat said he loved meeting people from around the world who came for the bumpy ride to the isolated Kalaupapa settlement.

Many say that regardless of whether Sproat had just met you or known you for years, he’d treat you the same – with a smile and a kind word.

“He was always so gracious to my wife and I when we would come to ride the mules on that sacred journey to Kalaupapa,” wrote mule ride customer Steve Aschmann on the Dispatch Facebook page. “Mr. Sproat always had time for kind, poignant words and pictures.”

Horner said for the time being, the mule ride will continue operating daily.

Without hesitation, Sproat-Tilini said her dad’s greatest accomplishment was his family.

“He was so proud,” she said. “No matter what we did, good or bad, he would be so proud of us. He would go to every one of my brother’s fights, all my sister’s games… he was always there, he didn’t want to miss any of it.”

Sproat’s wife Marlene remembers his special occasion cards. Instead of buying a new card every year for their anniversary or her birthday, she said he would recycle them and add a “very” to his “I love you” message.

Community member Teri Waros said she used to work at The Lodge with Marlene.

“Buzzy would always show up and hang out until the appropriate time to dance with Marlene,” Waros remembered. “Their love of each other, Buzzy’s incredibly warm and true character, his stories, his lifestyle – always made Molokai, Molokai.”

Sproat passed away at the age of 76, survived by his wife and 10 kids.

“He always had a smile on his face,” said Sproat-Tilini. “He was so funny — to the end [in the hospital], we were cracking jokes.”