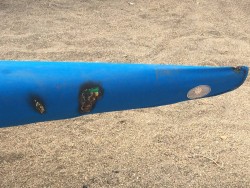 Several canoes by Kaunakakai harbor were damaged last weekend, including a Wa`akapaemua Canoe Club boat with a pair of burned patches left on the outside of the hull. Wa`akapaemua board member Camie Kimball said following a large party at the nearby Yacht Club venue Friday night, club members came to practice Monday to a shocking sight. The club’s new carbon fiber Unlimited canoe, purchased for $20,000 last year, had been burned through its thick canvas cover. The burns did not go fully through the hull, but caused significant damage.

“Someone must have sat there with a match,” she said, describing the time and purpose that seemed to be involved in causing the destruction. She said the canvas cover itself also cost in the thousands.

Another one-man canoe had also been pulled off the top rack of a trailer and left leaning against a tree, with one of its tie-downs burned. Canoes of a neighboring club were left covered in mud and footprints, Kimball said.

Kimball added that the club is not yet sure of the repair costs. A police report was filed for the damage.