A west Molokai couple woke up to an alarming surprise last month, when a bullet was shot into their home during the night. The homeowners, who live at the north end of Papohaku Beach, said they are not looking for an arrest, but want to share a message of hunting safety.

“I think it’s great if someone wants to get meat for their family,” said the homeowner, who wished to remain anonymous. “I’m not anti-gun. I grew up in rural Montana and went to my first hunter safety class when I was six years old. One of the first things we learned is to be aware of your background – know where your bullet is going to go.”

About midnight on Monday, Nov. 17, the homeowner said his wife awoke to what she thought was the sound of glass breaking. First thing Tuesday morning, they were shocked to find that a bullet had gone through their outdoor, motorized screen, a chair on their lanai, and shattered their plate glass door into “a million pieces.” The bullet didn’t stop there. Inside their house, it splintered a dining room chair, destroyed a desk, and ricocheted under the couch, according to the homeowner. 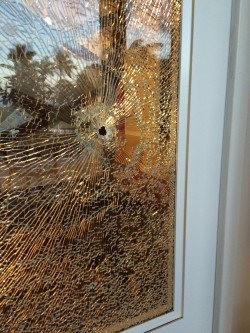 As an engineer who said he worked hard to buy eight acres in 2001 and spent years saving to build their house in 2008, the homeowner said based on his own experience with firearms, the bullet was shot from about 1,000 feet. He said he and his wife are lucky to be alive.

“If a person had just changed the angle a quarter of a degree [from that distance], it would have gone through our bed,” he said. “That’s what scared me so bad.”

Having lived on Molokai since 1996, the homeowner said he’s heard of a bullet hitting the outside of a home but never going through a house. And he’s not pointing a finger at locals – it could have been anyone, he said.

“There’s no good thing about hunting at night, and if you’re going to do it, go someplace where there’s no house within 100 acres,” he said. “There are thousands of acres that are not in close proximity to homes.”

The homeowner said although he and his wife often hear gunshots at night and see campfires on the north end of Papohaku, they have never called the police.

“I think that might change,” he admitted, after the incident. That morning, police came to investigate the bullet entry into their house and took photos. He told police he doesn’t want to press charges.

“I am so respectful of how the community works – I don’t want to know who it was,” he said. “In my experience living in a small community, the kupuna will talk to [whoever did it and take care of it.]”

“The police are doing an investigation,” said Richard Westlund, president of the West Molokai Association (WMA) homeowners group. “We’re not sure about the circumstances around the discharge of that firearm, so we’re not making any judgments. We hear gunfire at night quite frequently. Our response is we’re going to have to call Maui County Police more often on this.”

Westlund said the WMA is not against hunting, but is concerned for the safety of residents living in the area.

She said at that time, representatives of these organizations held meetings and “recognize that a long-term solution is needed and will be working with community members to develop a plan of action that satisfies everyone’s needs and, most importantly, keeps residents safe.”

“In the long-term we hope to create a solution for all residents, to allow access to safe hunting areas and for beach-goers to have a way to get to the beach without damaging private property,” Dathan Bicoy, operations manager for Molokai Ranch, told the Dispatch in 2012. “If we can all work together and respect each other, we can create a solution that works for everyone.”

Molokai Ranch did not return requests for comment following the last month’s incident, but Westlund said the Ranch had enacted a blanket policy that allows any individual on the west end observing a trespass or unsafe discharge of firearms to report it to police. Previously, only landowners could report trespassing. Westlund said homeowners have not been diligent enough in reporting hunting near homes, but said he expects that will increase now that a home has been damaged.

The homeowner said he spoke with Molokai Ranch leadership, who indicated they may block off access to Papohaku’s north end.

“I don’t think that’s a great solution,” the homeowner said. “It’s the best part of the beach.”

He said he thinks the solution lies with the community and raising awareness of the safety concerns.

“You bring [the incident] up in the hardware store and everyone is like, ‘what in the world, you gotta be kidding me!’” he said. “Night hunting in neighborhoods cannot be tolerated.”

One Response to “Bullet Shot Through Molokai Home”