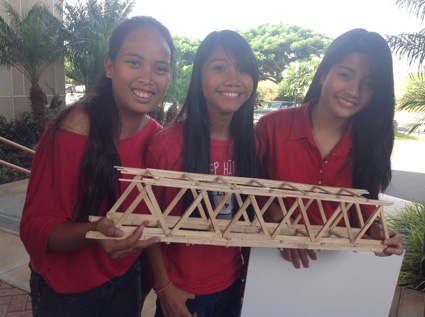 “The Red X” team won first place in the county competition and will be advancing to state competition in March. Their popsicle stick bridge held 85 pounds. Photo Courtesy Laree Mowat.

The girls at Molokai Middle School (MMS) are breaking all preconceived notions that boys are better at math and science. Last week, two all-girl teams from Molokai –the Red X and the Smurfettes –won first and third place in the Maui Economic and Development Board (MEDB’s) annual popsicle stick bridge competition, which tests students’ engineering skills. Five teams from around the county competed in this year’s competition, now in its fourth year.

Molokai’s team “Red X,” with Sarai Galam, Gabrielle Aquino and Paula Maroto, won first place. Their popsicle stick bridge withstood 85 pounds, over 50 pounds more than second place, a team from Maui, which held about 30 pounds. The three MMS girls will be advancing to the state competition in March. Their trip to the Junior Engineering Expo at University of Hawaii-Manoa, college of engineering campus will be paid for by MEDB.
“We were surprised when we found out we won,” said seventh grader Paula. “It’s awesome to represent Molokai [at the state competition] because even though we’re small, we have lots of creativity and we try to be the best.” 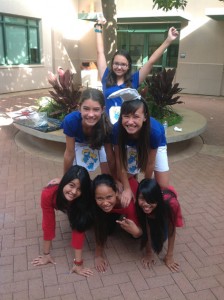 The other team from Molokai, the Smurfettes, came in third place in last month’s competition. Their team was comprised of Michelle McGuire, Susan Donnelly and Tabitha Fernandez. Their bridge held 25 pounds.

“I’ve learned that you have to really work hard and work together –if friendship is weak, then the bridge itself is weak,” said seventh grader Michelle.

The six girls of the MMS bridge team spent about one month working on the design of their bridges. The county competition is usually held in February but was pushed up to November this year, allowing less time to work on the bridges. The rules mandated that competitors may only use standardized popsicle sticks and Elmer’s glue, and the bridge can only weigh up to one pound four ounces.

At the competition, teams compete on two levels –first, their weight-to-bridge capacity ratio, or how much weight their bridge can hold. The second is how well they are able to present their idea to the judges.

“You can be a great engineer or you can have the best ideas, but if you don’t know how to sell them, you don’t do very good,” said MMS bridge team advisor Laree Mowat.

“Selling it” was one of the girls’ strong suits, according to Mowat. Most of the girls had been involved in robotics in previous years, which helped them with presentation skills. The girls knew not to fidget, to make eye contact, to smile and how to talk to people, said Mowat.

“I was really proud of them,” said Mowat. “They made our school look good.”

The girls on the team last year earned similar results for MMS –they also placed first and third in the county competition. The first place team’s bridge was never broken, holding more than 380 pounds before the judges ran out of weights, according to Mowat. Due to a storm, they were unable to attend the state competition on Oahu, though Mowat is certain “our team would’ve taken that competition.”

This year, she is looking forward to the girls representing Molokai in the upcoming state competition.

“Whether we win or lose, I hope they are proud of what they did …just being on that college campus… gets them thinking about the opportunities out there for them,” said Mowat. “I hope it sparks the desire to be an engineer one day because they have it in them.”