Building a Future in Science 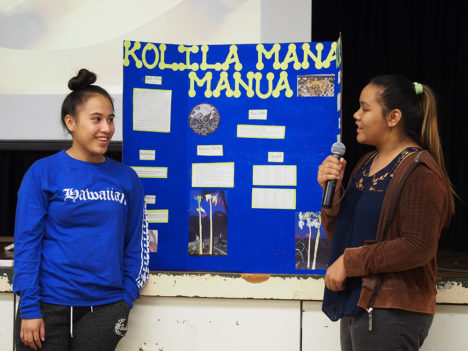 Molokai students are working on some groundbreaking science projects, from an app that helps repel deer and other unwanted animal intruders from your yard, to inventing a device that could play a huge role in the future of ocean science. Students at Molokai Middle and High schools and Aka`ula showcased their science projects last week at the Science Fair Family Night, as winners from school-wide competitions are preparing to move on to the Maui Regional Science and Engineering Fair next month. Hosted by Molokai LIVE and UPLINK programs, the event celebrated students’ application of science to real-world projects.

“This event is an opportunity for all students who completed their science boards to display and share their new-found knowledge with the community,” said Karen Weiss, one of the event organizers from Molokai LIVE.

The event’s keynote speaker, Gregg Kresge of Maui Electric, shared his company’s progress toward their ambitious goal of 100 percent renewable energy on Molokai by 2020. This year, he said, Maui Electric will be installing an electric vehicle (EV) charging station in Kaunakakai to support the growing movement toward EVs, especially on an island where gas prices are among the highest in the state. Maui Electric will also be partnering with Maui County to install an additional two charging stations later on, and in the future, he said stations will be added to the east and west ends to increase range and availability.

He encouraged students to stay engaged in science fields.

“We need you guys, this is your future,” he said. “We want you to get educated and participate… so that you can come back and help. There’s going to be opportunities, especially if we’re trying to go to 100 percent [renewable energy], we can’t get there alone, and also technologies are going to be constantly changing… who knows what is around the corner.”

Weiss said she has also been partnering with Maui Electric for some exciting educational opportunities and real-world science applications in the schools, such as the Smart Power for Schools program that will allow students to monitor the energy used by their school.

Among the winning projects, eighth graders Owen Svetin and Isaiah Hanchett-Lopez presented their project, Robotic Animal Control, which uses non-repetitive sound waves that can be heard by animals but not humans, to deter deer and other unwanted wildlife from entering an area monitor by a sensor.

Another team of eighth grade winners, Pomaika`i Stone-Sardinha and Pilialoha Ka`ahanui, also shared their project, Kolila Manauea Manua. They explored the use of invasive gorilla ogo seaweed as fertilizer on papaya plants and found it successfully speeded the plant’s growth. 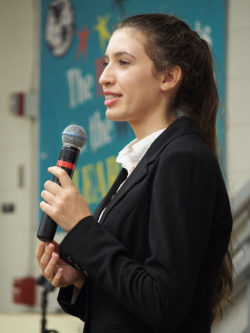 MHS senior Evelyn Haase has been developing her science fair project for three years, and it has already won at the international level. She said attending the International Science and Engineering Fair, which she did for the first time in eighth grade, is a memorable experience in itself.

“You go to these competitions and you meet people from all over the world, and you meet people who don’t even speak English and it’s really eye opening because in every location, somebody’s working on a project that’s important to them and their community,” she said.

Her project looks at ways to monitor ocean acidification.

“…More acidic ocean is caused by carbon dioxide in the atmosphere mixing with ocean water… and a more acidic ocean environment erodes calcium carbon structures… things like coral exoskeletons and mollusk shells,” she said, referring to the threat this poses to Molokai’s extensive fringing reef.

As part of her project, Haase designed an instrument to measure ocean acidification.

“Evelyn created and invented this device,” said Molokai High Principal Stan Hao. “This device is cheaper than any other model that is out there on the market… the closest thing on the market right now is about $7,000 to $13000. She created this with a little over $300 [using a 3D printer at Molokai High].”

Hao said she has the opportunity to make a profit if she chooses to manufacture and market her invention.

“Dream,” he told students. “Whatever your ideas are, we’re trying to facilitate that.”

Haase offered her own words of advice to attendees.

“I encourage all students and all adults and parents to find something in the community that you’re passionate about and go out and think about how you can make a difference and fix it,” she said. “Because even though you might not get recognition for it, there’s something really special about taking initiative to be part of your community and showcase the really special things about your community.”