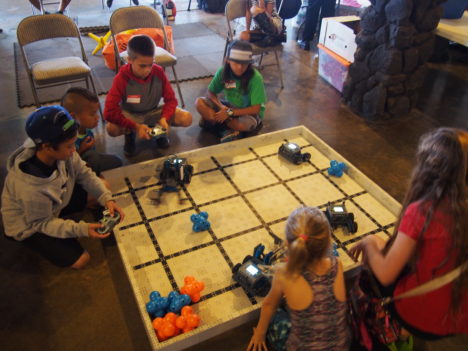 At first glance, it might have appeared to be a group of kids playing with a collection of innovative toys. Though they were having fun, the students at the Malamalama Education Fund dinner and fundraiser last Saturday were actually showcasing learning tools that may help them become engineers, mathematicians or scientists.

The goal of the event, put on by the Molokai Island Foundation (MIF), was to benefit the island’s education in science, technology, engineering and math (STEM) fields. Along with donations from corporate sponsors, proceeds from the dinner and silent auction held at the Molokai Community Health Center will go into a fund to assist with equipment and travel expenses for STEM-related activities.

“…In talking with teachers who are directly involved with STEM and robotics here, because of all schools in Maui County have these programs, grant funding became more competitive and thus Molokai schools weren’t able to secure grants often as in the past,” said Barbara Haliniak, MIF president. “So the Molokai Island Foundation board decided we wanted to make funding available to all our schools, thus the Malamalama Education Fund was created.”

A total of $12,770 was raised from the event, and those funds will be available for Molokai schools to apply for on a grant basis, said Leialoha Kaleikini, MIF secretary.

“We may just have our own engineer here on Molokai,” said Kaleikini. “Just to hear the excitement [of the students while demonstrating their projects] is really amazing. What better way to give hope for the new year?” 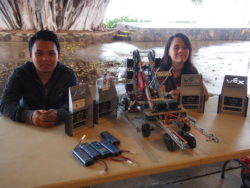 She added this will foster STEM-related programs that are already happening at Molokai schools, with the support of other grants. Seven schools will benefit from the funding: Kaunakakai, Kilohana and Maunaloa elementary schools; Kualapu`u Charter School; Molokai High and Middle schools; and Aka`ula School.

Students from around the island showed off their innovative projects in robotics, programming, technology and science. Keiki crowded around remote controlled robots as they guided them to move boxes. At a large “cafe” set up of laptops, students showed others unfamiliar with programming how to use computer models and coding to build virtual objects.

Members of the Molokai Middle School’s new drone club demonstrated flying a quadcopter from an iPad. Students in the club are learning to build, calibrate and program their own drones, according to `Iolani Kuoha.

At Aka`ula School, ecologist and parent Paul Hosten is guiding students in studying Molokai’s population of native endangered hoary bats. Using audio recoding and analysis equipment, students are collecting samples of the bats’ calls to learn more their locations and habits. The species is Hawaii’s only native land mammal, and this is the first project of its kind to study Molokai bats.

With so many groundbreaking learning opportunities taking place on Molokai, organizers of the well-attended dinner event know the funds will be put to good use.

“I learned first hand on how much the schools here are in dire need of equipment, competition fees, replacement parts, new robots and traveling off island to STEM programs,” said Haliniak. “Now, we can not only say we support our schools in words, but we can help fund their needs.”