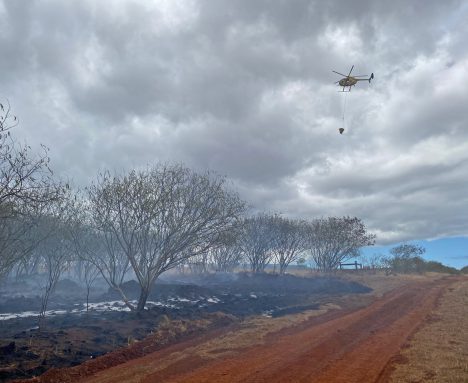 A 40-acre brushfire burned in Ho’olehua on June 28 just east of the Molokai Livestock Cooperative. Firefighters got the alarm around 11:30 a.m. and crews from around the island responded, including a helicopter from Maui.

The fire was under control by 12:35 p.m. but firefighters remained on site to mop up and monitor the area throughout the following night.

Officers from the Molokai Police Dept. contacted several individuals who live in the area to advise them of the situation, but no one was displaced, no structures were impacted and no injuries were reported, according to fire officials.

The cause of the fire remains unknown.