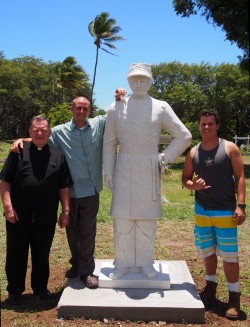 Molokai Catholic parishioners got to see the face of a new statue of Brother Joseph Dutton for the first time when it arrived on the island from China last Thursday. The statue of the Civil War veteran who worked for 45 years in Kalaupapa with St. Damien depicts him in his youth wearing his Union uniform. There is a growing movement to promote Dutton to sainthood alongside Damien and Marianne Cope, and the statue may be one starting point for that process, said Molokai’s Father Bill Petrie of St. Damian Catholic Parish.

The statue was donated to Molokai by Oahu benefactor John Perreira, who worked with local residents, including the late parishioner Larry Helm, former commander of the Molokai Veterans Caring for Veterans, to design the statue. Helm, who heard of Dutton’s work in Kalaupapa and the effort toward canonization, found a kindred spirit in Dutton as a veteran. After extensive research, Perreira said he and Helm found little-known images of Dutton in his youth as a Union soldier. Because of Molokai’s large veteran group, they decided on that persona to be portrayed in the statue, rather than the more common image of an older, bearded Dutton.

Perreira had originally hoped the statue would arrive on Molokai in time for Helm’s memorial service last month, but it was delayed in transit from China.

“I wasn’t sure until right now that it would be coming for sure,” chuckled Petrie as he watched the statue unwrapped. 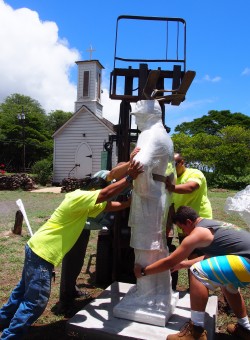 After much pushing, pulling, lifting and adjusting, the 2000-pound, 7-foot-tall marble statue was maneuvered onto a cement block next to St. Joseph church in Kamalo. Makoa Trucking employees worked with minimal equipment to safely unpack the statue.

“They made it look easy,” said Petrie of their work. “It [the statue] looks like it belongs here.”

The statue also arrived just in time for young Catholic parish members Galen Hodell and Matthew Bicoy to see it — and help install the statue — before they leave next week for their first year of seminary in Massachusetts. They will become the first vocations from Molokai for 35 years since Father Lain Aikona, said Petrie.

Honolulu Bishop Larry Silva will come over to Molokai for an official inauguration ceremony of the Dutton statue sometime in the future, according to Petrie.

Petrie said Dutton’s life is an example for many people, especially veterans. After Dutton served in the Northern Army during the Civil War, he got married, but the union ended in divorce. He turned to alcohol, and, while suffering from Post-Traumatic Stress Disorder as a result of his military career, drank heavily for the next decade, according to accounts of his life.

Things turned around for Dutton, however, when he began studying religion and became a Catholic. He learned about Father Damien’s work in Kalaupapa, and he volunteered there for the next 45 years until his death in 1931.

Petrie said the statue may aid in the canonization process, which requires several steps, one of which is public devotion. And — if miracles are documented after prayer for Dutton’s intercession — that will start the journey to sainthood.

Perreira originally intended the statue to be placed in Kalaupapa, but installation in the National Historic Park requires Congressional approval, which can take years. Petrie said that’s still the long-term goal for the statue, but in the meantime, both residents and visitors can admire the work of art — as well as learn about the man it depicts — where it now stands in Kamalo.