The search continues today for a downed aircraft off Ilio Point that was reported missing last night. Around 7 p.m. on Dec. 30, a Cessna 172 with the tail number N174LL, with three people on board, disappeared off radar about four miles east of Molokai’s Ilio Point after departing the Molokai airport for Honolulu.

The plane’s pilot has been identified as Michael Childers, with passengers John Mizuno and Whitney Thomas, according to the Coast Guard.

The Coast Guard is leading the search for the missing aircraft and has widened the search up to 17 miles northeast of Ilio Point. HC-130 Hercules airplane and MH-65 Dolphin helicopter aircrews from Coast Guard Air Station Barbers Point along with the crew of USCGC Kittiwake from Honolulu are searching by boat and air, with the assistance of Molokai Fire and Police departments. Molokai residents have reported that volunteer search crews are also helping on the west end.

Family and friends of the pilot and passengers have asked for prayers and assistance on social media. 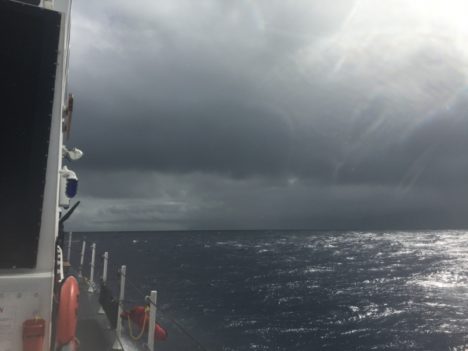 Rough seas and cloudy skies off Molokai during a search for the missing aircraft on Dec. 31. Photo courtesy of U.S. Coast Guard

Weather in the area today is 23 mph winds with waves at 6 to 8 feet and scattered showers. Last night around the time of the possible disappearance, winds were reported to be winds at approximately 19 mph, 4 to 6 foot seas, 3,000 foot ceiling and poor visibility.

This story will be updated as more information becomes available.