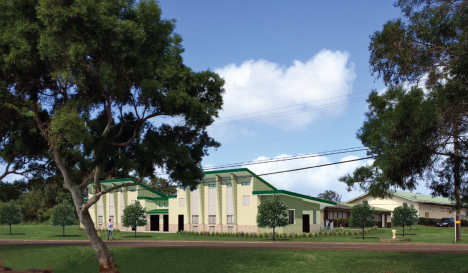 3D rendering of the completed science building on the edge of MHS’s campus. Courtesy of the Department of Education.

By the end of next year, Molokai High School (MHS) is set to have a 4,500-square-foot, cutting-edge science facility. For a school whose science students have earned county, state and international honors over the past year—all with no science labs—it’s well deserved, and a long time coming.

Since it split from the middle school in 2004, MHS hasn’t had its own lab facilities. However, this month construction began for a two-classroom science building on MHS’s campus.

“It’s really great that you guys … basically get a brand new, state-of-the-art lab,” said Duane Kashiwai, Department of Education public works administrator. “This is being designed according to the latest sustainability requirements that we have. So you guys will be one of the first ones [to get a building] designed to CHPS standards.”

CHPS, the Collaborative for High Performance Schools, sets criteria for energy efficiency in schools across the country. Kashiwai explained that the building will be equipped with energy-efficient lighting fixtures and water-saving devices. It’s designed to take advantage of natural daylight and ventilation, and in the future, will produce some of its own energy through rooftop photovoltaic panels.

“Their contract gives them until November 2016,” said MHS Principal Stan Hao via email. “They are looking to complete the construction by April or May.”

Students currently use two general-purpose classrooms for science class. The lack of water and gas-equipped lab stations prevents many hands-on activities, and high schoolers sometimes resort to using the middle school lab for activities, or do computer simulations to understand concepts normally learned through real-life experiments 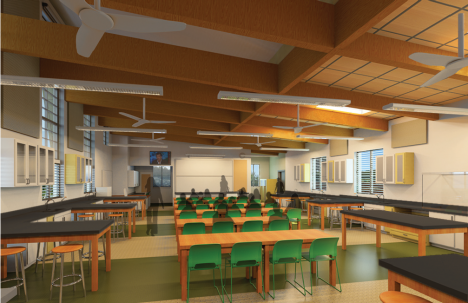 3D rendering of one lab in the two-classroom building. Courtesy of the Department of Education.

According to the project’s final environmental assessment, the building will include two classroom labs. Each lab will house eight lab stations along the edge of the room, with desk seating for instruction in the middle of the classroom.

Also in the works are a 64-square-foot rainwater harvest tank and a dry lo`i garden outside of the building. A small wind turbine originally proposed for learning and energy purposes has been removed from the project, Hao said last November.

In June, the school jumped the final permitting hurdles when the Maui County Council approved a community plan amendment, district boundary amendment and zoning change, all of which were required before the school could build on the land.

Potential issues with campus parking have also been solved. Since the county requires eight parking stalls per classroom, according to project planning consultant Raymond Cabebe, the new science labs would require another 16 stalls. Combined with the findings of a recent county analysis, the school would have had to add 214 more stalls. However, DOE officials said they weren’t expecting a growth in enrollment and received a variance from the county that exempted the need for more parking.

“As far as everybody was concerned, there was ample parking,” said Kashiwai.

Passersby on Farrington Highway will have already noticed the first steps of construction, and over the next year will watch the long-awaited building take shape.