Boys Soccer Digs In With Scrimmage 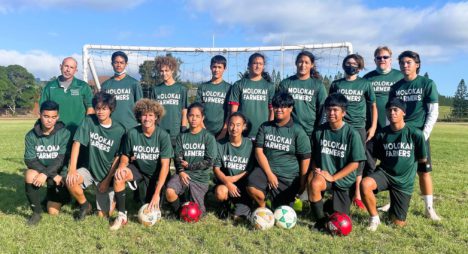 The Molokai High Boys Soccer team played its first and only game of the season last Friday, a scrimmage against Seabury.

“Our boys did good but Seabury showed us why they go to states every year!” said Molokai’s Head Coach Greg Lourio. “I’m very proud of them for their first year at a high school level playing against kids that played their whole lives! Most of my boys never been on a whole field before that was professionally lined and with big goals so they did great.”

The scrimmage was an informal way for the team to test their skills and get a taste of real competition on the field for the newly-formed team.

“In a collaboration between 21st Century [a grant-funded afterschool program] and Molokai Athletics, our Boys Soccer team has been practicing since start of the third quarter,” said Molokai High Athletic Director Lee DeRouin.

Lourio said the American Youth Soccer Organization (AYSO) on Molokai as well as the Middle School soccer program are back in swing for the sport “so we have great feeder programs to the high school now!”

“It can only get bigger and better!” he said of the team’s future.