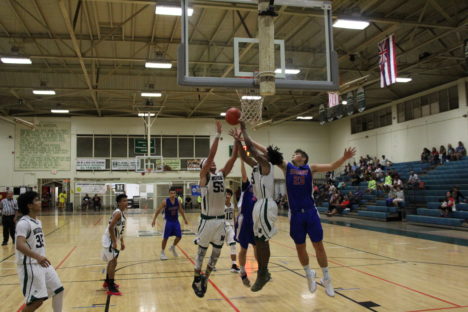 The Molokai Boys Basketball team had their first home games of the season last weekend at The Barn against unbeaten Seabury Hall. The Spartans, who won the Maui Interscholastic League Championship last year, played well and got two more wins to improve their record to 4-0 early in the season. Molokai dropped to 0-4 and will travel to Maui this weekend to face Haleakala Waldorf.

On Friday, the Spartans won 60-36 and Molokai’s efforts were led by Kreole Pawn-White with 10 points. Stephen Agcaoili had eight, Kaina Adolpho and Shraedon Naeole-Starkey had six each.

On Saturday, Molokai trailed by five at the half 23-18, but Seabury pulled away in the second half for a 71-39 victory. The Farmers were led by Agcaoili with 15 points, Adolpho had 8, Kanalu Kahale had 7, and Naeole-Starkey added six points.

Molokai Head Coach Nohea Pangkee was proud of his team.

“Seabury is a seasoned team but I saw a lot of positive things from our boys,” he said. “We need to be much more disciplined on both sides of the floor. When we play together and have big energy and take care of the ball, we look pretty good.”

“Playing at the Barn is always a challenge and the Molokai boys always give great efforts against us,” he said. “I liked the way we communicated defensively and executed our game plan but we still have a lot of improvements to make before the MIL tournament.”

Molokai will travel to Maui to face Haleakala Waldorf this weekend before coming back on home Jan. 26-27 to face St. Anthony at The Barn.