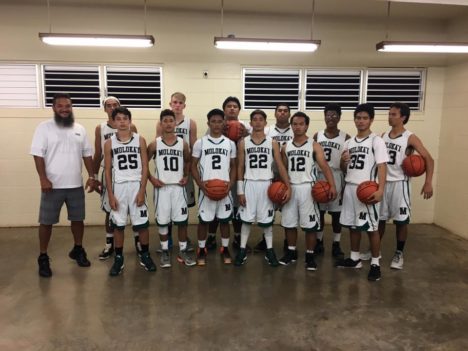 The Molokai High School Boys Basketball team shot their first hoops of the preseason last weekend at Maui High School. First year Head Coach Bob Danner and his team played the host Sabers in their first game and lost 54-37. The following night, the Farmers lost to last year’s DII champions, University High School 67-30. In their last game of the tournament, the Farmers faced league rival Seabury and came up short 61-41.
The Farmers start their regular season on the road at Hana Dec. 27-28. Their first home games of the season will be at The Barn Jan. 6 and 7 against Lanai.
This year’s MIL DII Championships Tournament is at Hana Feb. 9-11 and the state championships will be Feb. 15-17 on Oahu.