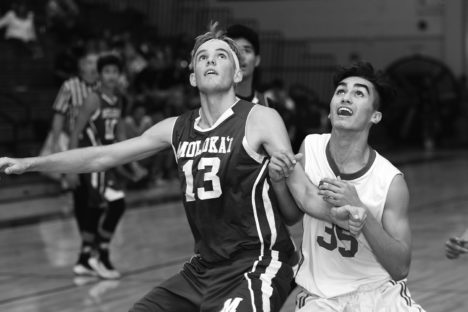 The Farmers played Keaau in their first game, and lost 59-31. Molokai then played host Maui High in the feature game Friday night and lost 50-36. Saturday, the Farmers faced Kamehameha Maui and fell short 47-29.

New Head Coach Nohea Pangkee has seven returnees and senior leader Kaina Adolpho from last year’s team, and said he is excited for the new season.

“The weekend went well and the kids were happy to compete,” Pangkee said. “We showed our strengths and weaknesses and the coaches were encouraged by the chemistry of the team, especially this early in the season.”

Molokai’s first regular season game will be Jan. 5 at Lanai, and Pangkee will have his team ready.

“We have about three-and-a-half weeks to get ready for our trip to Lanai, and we are eager to get back in the gym on Monday to continue building as a team,” he said.

Pangkee said preseason training has been good, and a lot of quality, hard work has been put into it.

“I think we are one of the better conditioned teams I have seen at MHS in a while,” he said.

Molokai’s first home game will be against Seabury at The Barn Jan. 12.