Boxing in the Home Ring

For the first time in over 30 years, young Molokai boxers will be able to slip on their gloves and hear their name chanted as they face off in front of friends and family on their home island. Old timers remember the last boxing matches held on Molokai in the early 1980s, but this weekend, the Molokai Southside Boxing Club will host the first USA Boxing-sanctioned amateur event on the island that anyone can recall. The event is drawing fighters ages 8 to 24 from around the state for 21 confirmed bouts.

For Molokai youth, the Molokai Southside Boxing Invitational is a chance to compete on their home turf and gain valuable experience in the ring, which is limited because traveling to off-island sanctioned events is so expensive. But despite the challenges, Molokai Southside boxers are no strangers to the competitive scene.

Since the club’s inception in 2008, its members have made a name for themselves, bringing home wins at a variety of events. One of the club’s standouts is 15-year-old Hunter Manaba, who competed at the Junior Olympics in June and the Ringside World Championships in Missouri in August.

For Hunter, the upcoming event “just feels like another fight,” but being on his own turf does change his attitude.

“This time, it’s going to feel more at home, more supportive — I won’t feel like an outsider,” he said. “[Being home] gets me pumped, hearing my name [in the audience.]”

He called it “inspiring” to be a part of the first Molokai event in so long.

For 15-year-old Michaiah Soares, however, fighting at home means “more pressure — you gotta win in front of family.” With three fights already under his belt, he said facing off on Molokai will “feel good,” though. 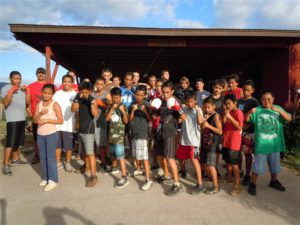 Members of Molokai Southside, TNT Molokai and Morroc’s boxing clubs stand together as they prepare for the Molokai Southside Boxing Invitational this Saturday at the Barn. Photo by Catherine Cluett

Molokai Southside coach Tomasito Manangan, who started boxing at the age of 8, recalls how there used to be local matches almost every weekend. While the youth he now coaches, including his 10-year-old son, haven’t had the same opportunities, he said there is a lot to look forward to this weekend.

On top of that list will be “the boys getting experience and showing all their hard work, with the crowd getting excited — it doesn’t even matter who wins or loses,” he said.

Not all the competitors will be boys. Hunter’s younger sister, 11-year-old Lahilahi Manaba, is one of the club’s female fighters and the only girl who will be facing off this weekend in her first fight.

She said before her match, she will “think about staying planted and winning.”

“I look forward to being able to get experience,” she added.

Lahilahi is also excited to don her fighting apparel. “I’m going to be a colorful fighter — I’ll be wearing orange, red, pink and black.”

The Event
The Molokai Southside Boxing Invitational will be held on Saturday, Sept. 22 at the Molokai High School Barn, with the first bout starting at 4 p.m. With 21 confirmed bouts, the event has drawn participants aged 8 to 24 from 11 clubs on Hawaii Island, Maui and Oahu, as well as Molokai’s three boxing clubs: Southside, TNT Molokai and Morroc’s.

Jersula Manaba, who is co-coordinating the event with her husband Dedric, said the event has drawn a lot of community support and excitement. With a focus on youth and their accomplishments in the sport, along with the close supervision of 10 officials coming over from the Oahu-based Local Boxing Commission (LBC), the event promises to be a family-friendly, community event. Manaba said police and fire personnel will also be on-site, and no alcohol, drugs, smoking or swearing is permitted. 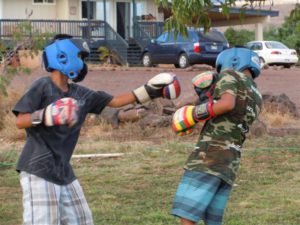 Two young Molokai boxers spar during practice at the home of their coach, Tomasito Manangan. Photo by Catherine Cluett

“Everyone has an opportunity to look at the values of respect and friendship — it’s a sport of gaining friends,” said TNT coach John Kelly, who will have two boys from his club fighting in the event. “It’s a great opportunity for youth to show their skills — it’s all about the kids.”

“Because there have been no sanctioned matches on Molokai, we’ve had to take the club off-island,” said Manaba. “We could only afford three trips in the past year.”

Manaba said boxers need five bouts under their belt before they can compete nationally, and for Southside youth, travel expenses to fight in sanctioned bouts have been a major hurdle. With the goal of holding more Molokai events in the future, she said LBC officials will be staying on the island an extra day to hold a clinic to certify Molokai residents to officiate future matches. Interested community members can register Saturday from 9 a.m. to noon at the High School or at the clinic held on Sunday at 10 a.m. at Home Pumehana Room 1.

Along with bringing the sport of boxing back to Molokai and offering youth an opportunity to show their skills, the Invitational is also a fundraising effort for the 23-member Molokai Southside club. Manaba said profits will be earmarked for travel and new equipment for the club.

Tickets can be purchased from club members ahead of time, or at the door: $30 for ringside seats, $20 for general admission, $12 for students and free for keiki under age 5. Club T-shirts and concessions will also be available.

One Response to “Boxing in the Home Ring”