Boxing at the Barn

The Molokai Southside Boxing Club presented their second amateur boxing event on June 1 at Molokai High School gym after the success of their September 2012 event. Amateur Boxing of Hawaii under the umbrella of USA Boxing and the Hawaii State Boxing Commission sanctioned this 17- bout event. The event gave many novice boxers the opportunity to have their first match. 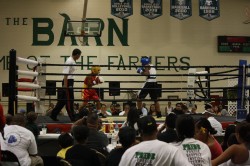 Opening the event with prayer and blessings to all athletes, their coaches and teammates was Tania Manaba-Will followed by her rendition of the Star Spangled Banner and the sweet voice of `Olelo Hamakua-Poepoe singing Hawaii Pono`i. The emcee/announcer for the evening was Zeke Kalua.

Taylor Ybarbo (Molokai Southside) fought three tough one-minute rounds defeating opponent, Abigail Castro of Honolulu BC. This is their second match since an April 2013 event on Oahu. Taylor and Abigail were ultimately awarded “Best Bout of the Night” by the judges and officials.

A Certificate of Achievement was presented to Hunter by the County of Maui, signed by Mayor Alan Arakawa, for his outstanding achievements in numerous national boxing championships.

Earlier this year Hunter traveled to Reno, Nevada for the National Open Boxing Tournament representing Hawaii. He earned a silver medal and is an alternate on Team USA. This summer, Hunter will represent Hawaii at the 2013 National Junior Olympic Boxing Championships in Mobile, Alabama; fellow team mate, Michaiah Soares will accompany him, both earned their spot on 2013 Team Hawaii in two different weight classes. Continuing the circuit, they will travel to Mesquite, Nevada for the National Junior Golden Gloves Tournament and Independence, Missouri for the Ringside World Championships. Congratulations to all athletes and coaches for a job well done. 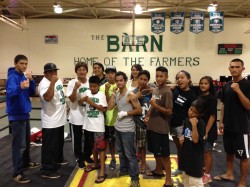